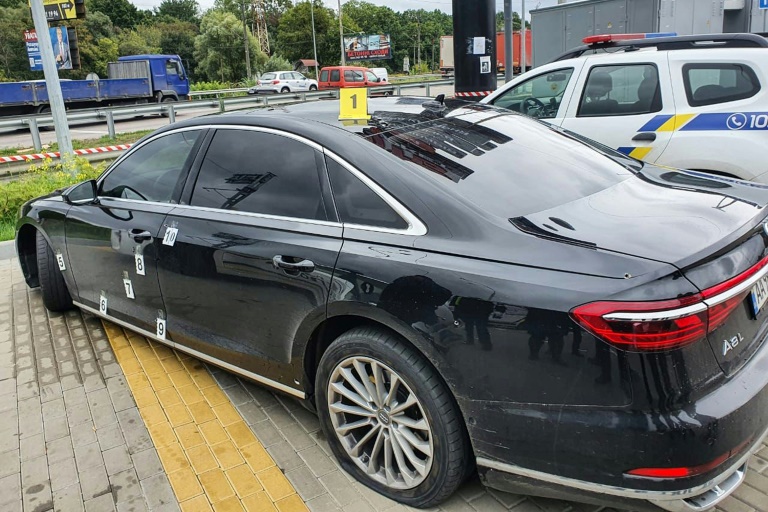 Ukrainian President Volodymyr Zelensky on Wednesday promised a “firm response” after gunmen opened fire on a car carrying his main assistant, which officials said was possible retaliation for trying to curb the oligarchs.

More than 10 bullets hit a black Audi carrying Zelensky’s adviser Sergiy Shefir in an attack near the village of Lisnyky, south of the capital Kiev, around 10:00 am (07:00 GMT) on Wednesday.

The 57-year-old former screenwriter and longtime partner of comedian-turned-politician Zelensky escaped unscathed, but his driver was “seriously injured,” the Interior Ministry said.

The shooting was one of the most high-profile assassination attempts in modern Ukrainian history and came after the country’s 43-year-old leader vowed to restart the political system and fight against the influence of powerful oligarchs.

â€œSaying ‘hello’ to me by pulling out of the forest on my friend’s car is weak,â€ Zelensky said in a video statement from New York.

â€œThe response will be strong.

Zelensky, who is in New York for the United Nations General Assembly, said it was not yet clear who was behind the attack.

But he added: “It does not affect the path I have chosen with my team: towards changes, towards exiting the shadow economy, towards fighting criminals and big influential financial groups. “.

Authorities have opened an investigation into attempted murder. Photos released by officials showed a limousine with bullet holes along its hood and the driver’s door.

Shefir called the attack on his life an effort to “intimidate” the presidency.

The assistant may have been targeted for his work or as part of an attempt to put pressure on senior Ukrainian leaders or to destabilize “the political situation in our country,” the police chief told reporters. national Igor Klymenko.

The US and UK embassies in Ukraine condemned the attack.

“Criminal violence, including for political ends, is never justified. We wish the driver injured in the attack a speedy and full recovery,” the US mission said on Twitter.

British Ambassador to Ukraine Melinda Simmons tweeted that she was “very worried” and wished Shefir’s driver a speedy recovery.

He told reporters that any attempt to intimidate the president would fail. â€œHe chose the right path,â€ Shefir said.

He admitted, however, that the attack was “a little scary”.

â€œWe were driving and all of a sudden there were gunshots,â€ said Shefir, praising his driver for continuing to drive despite his injury.

The driver was operated on and his life was not in danger.

Police said they were not ruling out the involvement of security services in foreign countries.

The Ukrainian military has been fighting Moscow-backed separatist fighters in two separatist regions bordering Russia since 2014, when the Kremlin annexed the Crimean peninsula. The war claimed more than 13,000 lives.

The Kremlin has denied any role in Wednesday’s attack.

“Of course, this has nothing to do with the real situation,” Kremlin spokesman Dmitry Peskov said, accusing Ukraine of usually looking for a “Russian trace”.

Vitaliy Sych, editor-in-chief of Ukrainian magazine Novoye Vremya, said that an attack on the life of an assistant to the president was “unprecedented”.

“I wonder who dared to do this and why,” he said on Facebook.

This year, Zelensky ordered his government to put together a register of oligarchs, a list of tycoons who influence the country’s media and politics. The names, however, have yet to be revealed.

Shefir was born in the central industrial town of Kryvyi Rig and studied to be a metallurgist, but as a student he started doing comedy for the popular KVN show with his brother.

In 2003, he co-founded a production company called “Kvartal 95” with Zelensky, elected president in 2019.

Shefir produced and wrote “The People’s Servant”, a television show in which Zelensky portrayed a schoolteacher who became president and launched his political career.