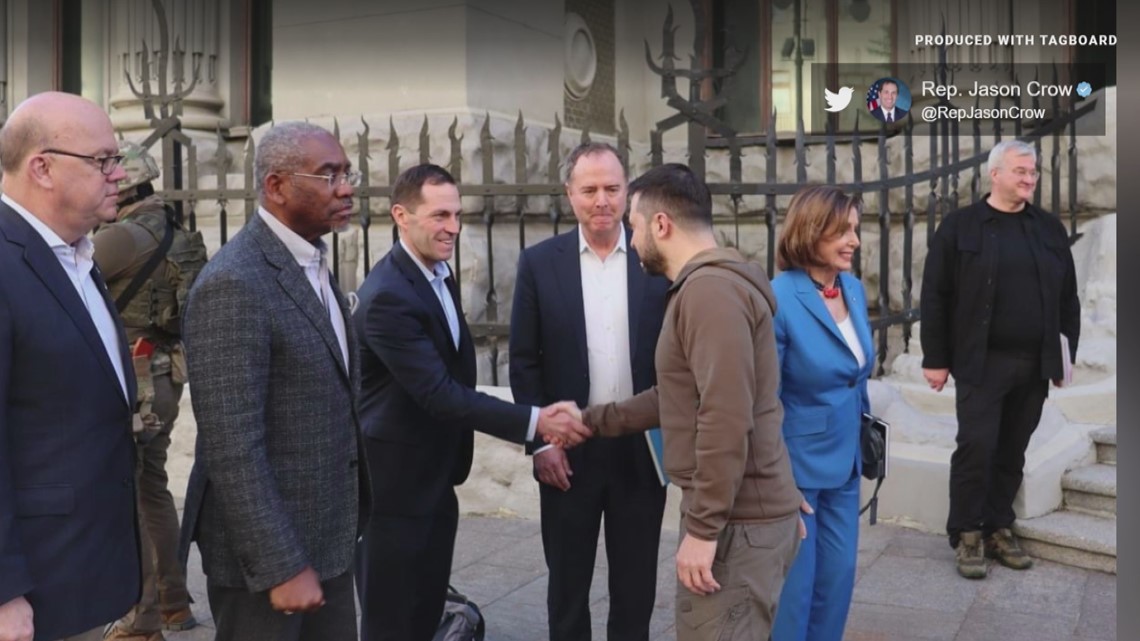 DENVER — Rep. Jason Crow (D-Colorado) is back in Colorado after joining a U.S. delegation in kyiv over the weekend to meet with Ukrainian President Volodymyr Zelensky.

“We were able to spend almost four hours with him and his top advisers engaging in a very in-depth discussion,” Crow said during a press call Wednesday morning.

Crow said the delegation, led by House Speaker Nancy Pelosi, discussed with Zelensky the future of the conflict with Russia and what Ukraine needs moving forward.

Crow, an Army veteran who sits on the House Armed Services and Intelligence committees, said his conversation with Zelensky focused on the specific weapons systems Ukraine needs in the fight against Russia.

“Deadly drones,” Crow said. “He needs more sophisticated, longer-range drones that can target, that have sophisticated precision strike munitions, and that can also come back and be used multiple times and rearmed.”

“It would really have a devastating impact on the Russian military and provide the Ukrainians with a new tool to defend themselves,” Crow said.

The congressman added that Ukraine could also use anti-ship missiles.

“It’s become very clear that we’re going to have to help the Ukrainians win this militarily,” Crow said. “That was the message that was very clear to us.”

The congressman called Zelensky “serious” and “gloomy”, drawing attention to his “mastery of tactics” on the battlefield.

“In a few very short months, [Zelensky] became what I believe to be one of the greatest wartime leaders in history,” Crow said.

Crow said the delegation made it clear to Zelensky that the United States would support Ukraine until the end of the war.

“We can do anything short of providing boots on the court or getting directly involved, and I think we should continue to do that,” Crow said.