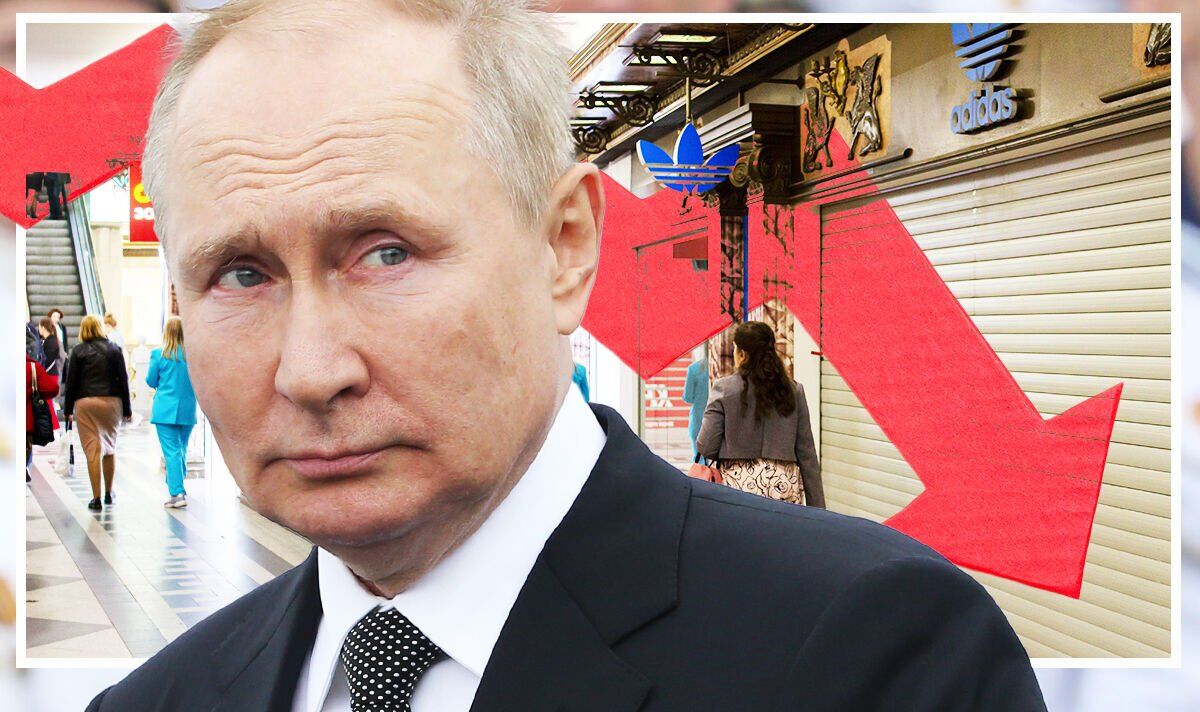 Ukraine: Vladimir Putin exposes his own weakness with mistakes

Residents of the country also have to make do with low-quality substitutes for Western products, according to Natalia Shapoval, vice president of the Kyiv School of Economics. Ms Shapoval stressed that Putin was doing his best to conceal the harsh reality from the Russian people as much as possible.

Its report, titled Impact of sanctions on the Russian economy, suggests that real wages in the Russian Federation fell by 6.1%, while in April the decline was even worse -7.2%. The recorded decline in real income has reached its highest level in seven years.

The report adds: “Russians only got poorer in 2015, after the annexation of Crimea and the first Western sanctions and the fall in the price of oil, which caused a collapse of the RUB and a rise in inflation. “.

“But other factors include the exit of foreign companies leading to fewer working hours and a lower average salary; significant reduction in the production of certain indicators (automotive, transport, etc.).

Shoppers line up outside H&M stores in Moscow as the company pulls out of Russia (Image: GETTY)

“Yet some industries have also decreased average wages – for example, production of furniture, electronic equipment, etc.”

She added: “We are also seeing an increase in competition for vacancies on job search sites.

“More than 492,000 people (estimated based on a sample of workers working in international companies) are likely to work fewer hours.”

Russians were already feeling the reduction in their quality of life, but not necessarily the effect of falling real wages.

READ MORE: Russian economy in MELTDOWN as vital industry and imports are crippled

A protester is arrested by police officers during an anti-war demonstration in Saint Petersburg (Image: Reuters)

She said, “It’s because there is a shortage of quality imported Western goods.

“These goods are replaced either by local products of lesser quality, or by Chinese products – which are cheaper because of lower quality”.

As things stand, despite sporadic protests against the war, Ms Shapoval was skeptical about the possibility of widespread protests over deteriorating economic conditions.

She said: ‘It is unlikely – given current polls with near unanimous support for Putin and the war – that there will be an increase in civil unrest.

“At least before the number of dead soldiers becomes very high and Putin tries to force military mobilization in areas closer to Moscow.”

Ms Shapoval’s grim prognosis was backed up on Friday by preliminary data from Russia’s Federal Statistics Service Rosstat showing that the country’s economy shrank 4.0% year-on-year in the second quarter of 2022.

The economy plunges into recession after Moscow sent its armed forces to Ukraine on February 24, triggering sweeping Western restrictions on its energy and financial sectors, including a freeze on Russian reserves held abroad, leading to dozens of ‘Western companies to exit the market.

Rosstat did not provide further details, but analysts said the contraction was caused by weak consumer demand and the aftermath of sanctions.

Sergey Konygin, an economist at Sinara Investment Bank, said: “Data for June suggests that the contraction in the Russian economy appears to have bottomed out as conditions in some industries stabilize.”

However, the contraction in gross domestic product in the second quarter was not as deep as expected, with analysts on average expecting GDP to shrink 7% year-on-year in April-June after rising 3.5% in the first. trimester.

Central bank analysts expected GDP to contract 4.3% in the second quarter, saying it was on track to fall 7% in the third quarter. The central bank expects the economy to begin to recover in the second half of 2023.

Given the highly unstable political environment, official forecasts regarding the depth of the Russian recession vary.

The Economy Ministry said in April that gross domestic product could fall by more than 12% this year – after growing 4.7% in 2021 – in what would have been the biggest contraction since the mid-1990s. 1990.

But the forecast has since eased as Russia pushes back on restrictions.

The central bank had predicted in April that GDP would contract by 8-10%, but last month it revised that figure to predict a contraction of 4-6%.

Central bank Vice President Alexei Zabotkin said: “GDP contraction will bottom out in the first half of 2023. The economy will move towards a new long-term equilibrium.”

Gossip from Ukraine – THE NEW INDIAN