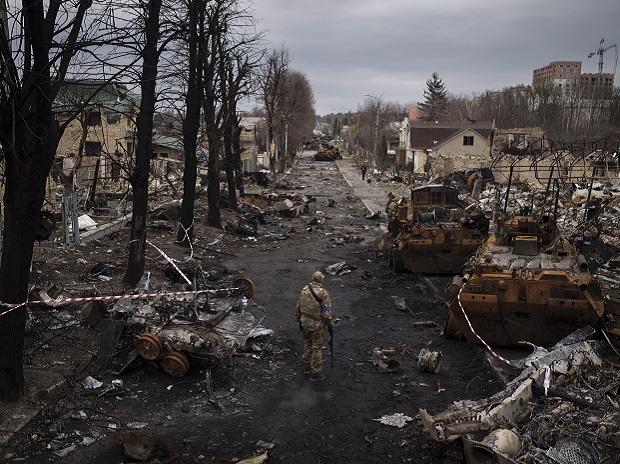 New Delhi, April 7: After more than a month of Russian invasion of Ukraine, the war takes an uncertain direction without respite with the attack of the first against the second, causing death, destruction and unimaginable displacement of innocent. About 3.8 million people have already left for neighboring European countries, with Poland bearing the biggest burden to welcome them.

As the Russians advance into more Ukrainian cities, including the western part of the country which was unaffected until some time ago, more people are likely to move, which will exert enormous pressure on neighboring countries. While the Ukrainians are heroically resisting the Russian attack, the military balance in terms of tanks, rockets, missiles and air power is tilted so much in favor of the Russians that it is only a matter of time when kyiv, Mariupol and Kharkiv also fall into Russian hands.


Russian and Ukrainian negotiators are conducting their sixth round of talks in Istanbul, Turkey without significant breakthrough as of this writing. The only positive result of these negotiations is the creation of some humanitarian corridors allowing people to flee to safer places. Even this is plagued with mutual recriminations from each side accusing the other of sabotaging the flow of traffic. Better not to mention the humanitarian catastrophe that the war has imposed on ordinary citizens, including women and children.

Russia has announced that it will “significantly reduce” military combat operations in two key areas of Ukraine “to build mutual trust” in the peace talks. The decision to reduce operations around the capital, Kyiv, and the northern city of Chernihiv is the first sign of tangible progress in the talks. But the extent of any reduction in military activity is unclear, while Ukraine remains skeptical. The US and UK also said the pledge should be treated with caution.

On Tuesday, Russian Deputy Defense Minister Alexander Fomin said, while talking about reducing military activity, that there had been progress on Ukraine’s “neutrality and non-nuclear status”, which are two major concerns for Moscow. Ukrainian negotiators had proposed to Russia that Ukraine adopt neutral status in exchange for security guarantees – an international mechanism where guarantor countries would act to protect Ukraine in the future. In exchange, kyiv would not join NATO, a key Russian demand.

It was not a new commitment, but it was spelled out in great detail. Russia’s chief negotiator Vladimir Medinsky said the talks had been “meaningful” and that Ukraine’s proposals on neutrality would be submitted to President Vladimir Putin. However, he clarified that before a presidential summit could take place, a treaty would have to be drafted and approved by negotiators and then signed by foreign ministers. “It’s not a ceasefire but it’s our aspiration, to gradually achieve a de-escalation of the conflict at least on these fronts,” Medinsky told Russian news agency Tass.

Many are skeptical about the real meaning of Russia’s announcement on the reduction of military operations; whether it is a promise of withdrawal or simply an acceptance that he has already failed in these areas and will instead turn all his strength further east. Ukraine has the support of the West in its information war against the Russians. It is natural that Russian statements are received with skepticism. On Wednesday, Russia declared a ceasefire in Mariupol. Meanwhile, Ukrainian forces are preparing for further Russian attacks in the east of the country as Moscow reinforces its troops there after suffering setbacks near the capital kyiv, President Volodymyr Zelensky said Thursday.

The Russian demands and conditions for a ceasefire are also quite outlandish, with no reliable guarantee of Ukraine’s sovereignty and security in return for Zelensky agreeing to give up his ambition to be part of NATO. Armed with rhetoric, each of the parties involved in the conflict is demagoguery in a way that makes the compromises, essential in negotiations, difficult. Apart from Kyiv not joining NATO, Moscow also wants Ukraine to recognize Crimea as part of Russia and the separate status of two independent republics of Donetsk and Luhansk in the Donbass region. Mariupol is the main obstacle preventing Russia from connecting Crimea by land bridge to the self-proclaimed “people’s republic” in the eastern region of Donbass. Russia has focused its efforts on taking Donbass since President Putin announced a “new phase” in the war.

British military intelligence said last Monday that Russian forces had gained ground in the vicinity of Mariupol. Thursday’s declaration of a ceasefire in Maruipol, however, proves that Russia may not have succeeded in gaining full control of the city. Besides Ukraine’s neutral status, President Zelensky also seems open to discussing the status of the two self-proclaimed republics.

Whatever happens in the negotiations between Russia and Ukraine will not end the war, because war is no longer a bilateral affair between the two countries. It is basically a war between Russia on one side and NATO and the West on the other. Ukraine just happens to be a proxy. Without the boots on the ground in Ukraine and the declaration of a “no-fly zone”, NATO is fully involved in the war in terms of supplying arms, ammunition and advanced weapon systems to the Ukrainians , without which it would have been almost impossible to mount the kind of resistance they are making against the Russians.

Imposing crippling sanctions like freezing Russian assets in Western banks, freezing US oil imports even though not all European and NATO members have accepted the import ban , are all practical signs of declarations of war. Massive economic aid is flowing from Western and NATO countries to Ukraine, strengthening the resolve to fight a courageous fight against the Russians. After the NATO Brussels summit, Poland is emerging more as a frontline state in the West’s bid to see Russia fail its game plan in Ukraine.

While the West has talked about dialogue and negotiation to end the war, its actions like imposing more and more sanctions against Moscow do not create an enabling environment for the same. The past history of sanctions shows very clearly its futility in the cessation of hostilities. Without a doubt, Moscow is feeling the pinch of the sanctions on its economy and its ability to continue the war. According to reports, he is appealing to China for economic and military assistance. As long as it can export oil and gas, Moscow can somehow support the war until Ukraine is pulverized. The sanctions don’t just affect the Russians, they affect the West to a large extent, if not equally.

Since the imposition of the sanctions, oil prices have risen astronomically. The same goes for food prices, as Russia and Ukraine are major wheat producers. Rising transport costs lead to inflationary trends in Western countries.

The moot point is that war does not help anyone, therefore, the necessity is to end it. Until the West is involved in negotiations and dialogue, the war will not end. Negotiations between Russia and Ukraine will only bring temporary respite and unequal compromises, but no lasting solutions unless Zelensky capitulates and completely surrenders to the Russians. The humiliation of either side would not be good for a lasting peace.

A tripartite dialogue and negotiation for an eventual neutrality of Ukraine guaranteed by both Moscow and the West is the crying need of the hour for peace and stability in the region. The West must rise to the occasion, show statesmanship and call for such a meeting, possibly another emergency meeting of the UN General Assembly to initiate such a dialogue.

(Only the title and image of this report may have been edited by Business Standard staff; the rest of the content is auto-generated from a syndicated feed.)