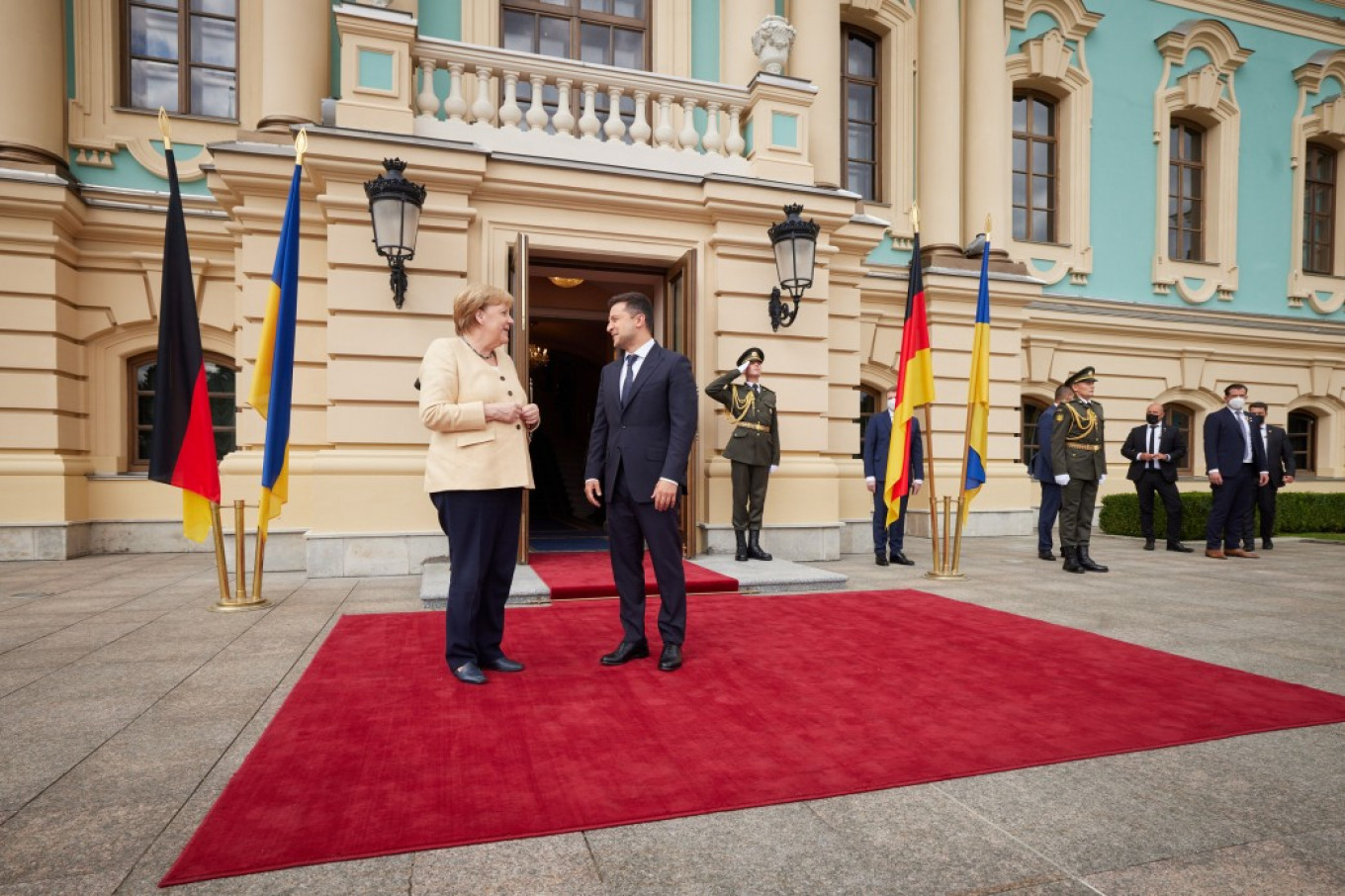 The comments came as the two leaders last met in Kiev before Merkel left after 16 years in power next month and days after her last talks with Russian President Vladimir Putin in Moscow.

Kiev is fiercely opposed to the pipeline, arguing that it will increase Europe’s energy dependence on Russia and Moscow’s geopolitical weight.

“We view this project exclusively through the prism of security and see it as a dangerous geopolitical weapon of the Kremlin,” Zelenskiy said at a joint press conference with Merkel.

While the main risks after the completion of the $ 12 billion pipeline under the Baltic Sea would be “borne by Ukraine”, he said, it would also be dangerous “for all of Europe”.

Merkel said Berlin agreed with Washington that “gas should not be used as a geopolitical weapon.

“It will all depend on the extension of the transit contract through Ukraine – the sooner the better,” she said, referring to the expiration of Moscow’s agreement with Kiev in 2024.

As the construction of the pipeline created tensions between Germany and the United States, Washington ultimately lifted sanctions against the Russian-controlled pipeline builder.

Merkel sought to reassure Zelenskiy on Sunday, saying the German-US deal specified “sanctions” if the gas was “used as a weapon”.

These commitments are “binding on future German governments,” she noted.

She also said she had discussed with Putin the extension of Russia’s transit contract with Ukraine beyond 2024.

“We feel a special responsibility” and “understand the great concerns expressed by President Zelensky,” she said. “We take them very seriously.”

The Ukrainian leader, however, said that although he and Merkel had discussed the extension, he had only heard “very general things”.

In addition to the issue of the pipeline, the two leaders also discussed the protracted conflict between Ukraine and pro-Russian separatists in the east, which has left more than 13,000 dead.

Merkel helped mediate the conflict, which erupted after Moscow’s annexation of Crimea in 2014.

The following year, she played a crucial role in concluding the Minsk peace accords, which brought an end to the fiercest clashes.

But many in Ukraine believe the deal, which assumes some autonomy for the separatist parties in the Donetsk and Lugansk regions, was unfavorable to Kiev and difficult to fulfill.

They are also concerned about its retention after Merkel leaves office.

On Sunday, the German leader said she remained in favor of the current format of mediation between Kiev and Moscow led by Berlin and Paris because they allowed the parties to “talk”.

“Without it we would have no contact,” she said.

But she admitted that the results were “unsatisfactory” because “Russia is directly involved in this conflict”, which justifies Ukraine’s decision not to speak directly with the separatists.

“Therefore, we are in a situation where the talks are going round in circles,” she said.

Despite her strong support for Ukraine, Merkel also frustrated Kiev in its opposition to sending weapons there.

On Sunday, Zelenskiy said that despite Germany’s continued refusal to send arms, Kiev “is still counting on and waiting for it.”