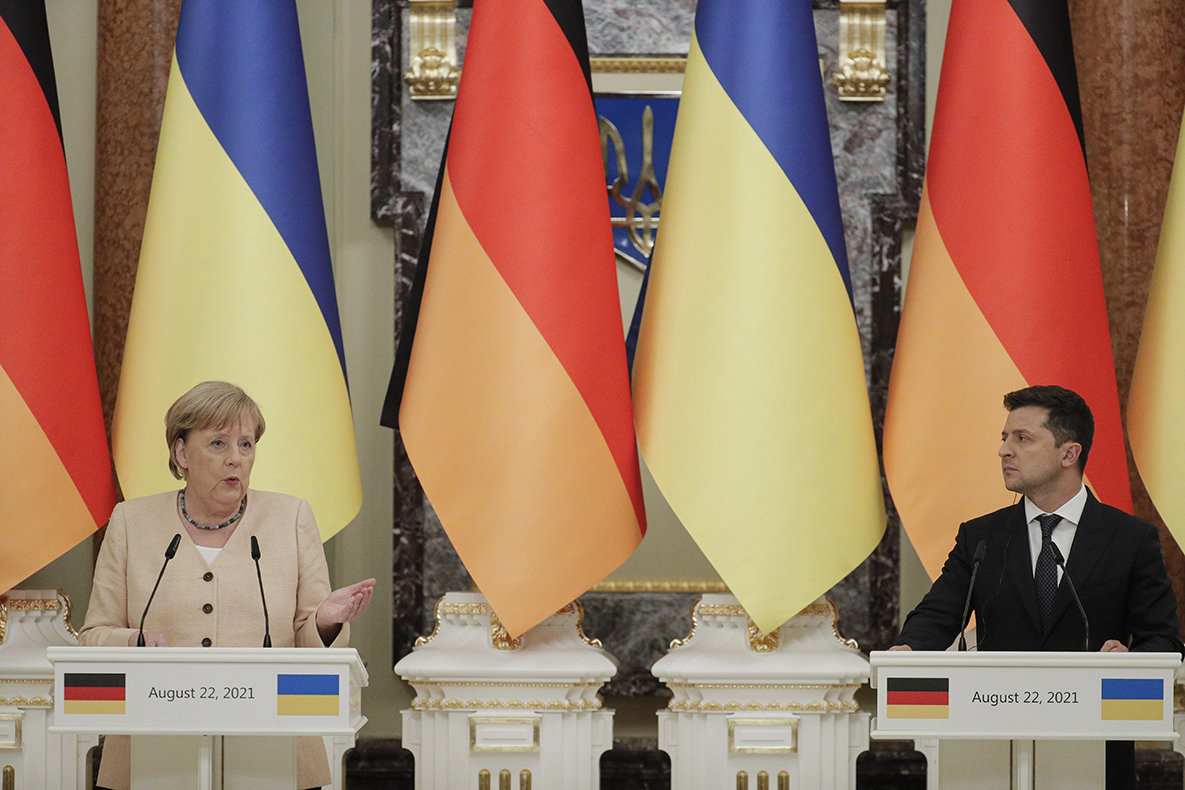 UKRAINE today hosted German Chancellor Angela Merkel for talks ahead of official celebrations tomorrow marking the 30th anniversary of her declaration of independence from the Soviet Union.

Merkel traveled to Kiev from Moscow, where she met with Russian President Vladimir Putin. Germany is seeking assurances that Russia will continue to deliver gas through Ukraine to the European Union.

But the visit to Kiev is seen as an opportunity to underline unity with the EU against Russia, with the Volodymyr Zelensky government calling a conference on the reconquest of Crimea before tomorrow’s anniversary.

Merkel said she hoped to revive the peace process in Donbass, where a civil war sparked by Maidan’s 2014 coup in Kiev has raged ever since, claiming more than 14,000 lives.

But its commitment to work to ensure “Ukraine’s territorial integrity” will be seen as support for Ukraine’s current claim to Crimea, which Russia annexed in 2014.

A subsequent referendum in the predominantly Russian ethnic territory voted for union with Russia, but this was not recognized by many other countries.

Ukraine will open on Monday the inaugural meeting of a new organization, the Crimean Platform, which aims to increase pressure for the recapture of Crimea.

Topping the agenda will be the alleged persecution of the Crimean Tartars, who make up about 15 percent of the peninsula’s population.

Crimean Tartar Mejlis, an organization affiliated with the Platform for European Memory and Conscience – an anti-Communist body created by the EU to promote historical narratives emphasizing the “crimes of totalitarianism” – accuses the Russia for moving more ethnic Russians to Crimea to change its demographic makeup.

But Russia says Ukraine and its Western backers are sponsoring terrorist groups such as Hizb ut-Tahrir, an Islamist organization banned in Germany as well as Russia, in an attempt to destabilize Crimea.

The Supreme Council of Ukraine declared independence from the Soviet Union on August 24, 1991, although Ukrainians voted over 80% to remain in the multinational state in a referendum in March of the same year. .

The Communist Party of Ukraine said this week that it would commemorate events like “an anti-socialist coup … with tragic consequences”.

Beginning of the Crimean Platform summit in Kiev