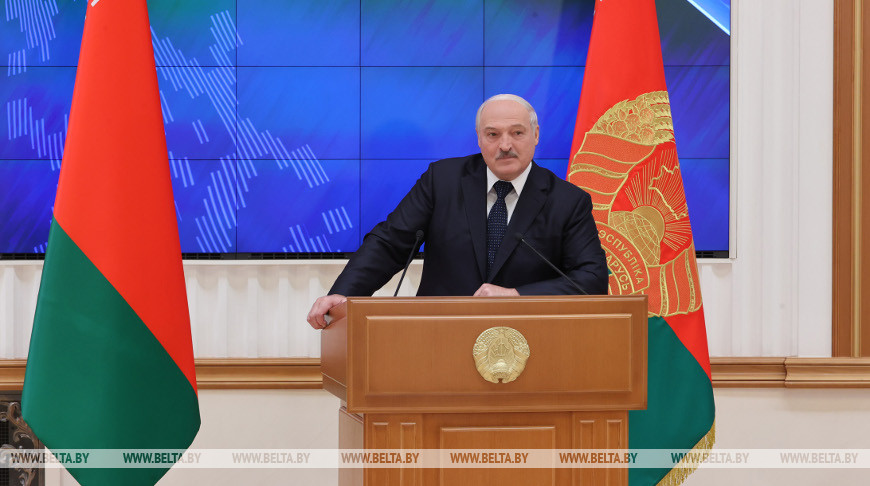 Asked about the roots of the Belarusian nation, Alexander Lukashenko said he had been encouraged to talk about it by recent statements by the German chancellor, who reportedly discussed the state and sovereignty of Belarus with the Russian president.

Alexander Lukashenko said: “As we open the Constitution, we must understand that our roots are very old. No one can criticize us from this angle. Our ancestors established the Principality of Polotsk as early as the 10th century. This sacred land is the cradle of the Belarusian state. Polotsk was one of the three key centers of ancient Rus alongside Novgorod and kyiv. Other principalities were established later. A local dynasty ruled the Principality of Polotsk for a long time while other lands were ruled by Kyiv appointees. In other words, the source of our statehood was already independent.

He remarked that Belarusians are also proud of the fact that the great woman Euphrosyne of Polotsk was one of them. She was Belarus’ first saint, a Girl Scout and a politician. She had the right to personally sign documents and had her own seal. “Do you know many women of this age who might have diplomatic correspondence with men in positions of power? His opinion carried weight. And above all, she devoted her life to a great mission: the establishment of peace in the Eastern Slavic lands, mired in quarrels, ”recalled Alexander Lukashenko.

In this mission lies the root of Belarusian pacifism and good neighborly relations, which are part of the mentality of the nation and determine the politics of modern Belarus, underlined Alexander Lukashenko.

Speaking about Christian values ​​and Slavic brotherhood, Aleksandr Lukashenko remarked that the 10-13th centuries were very complicated times. A struggle for power and money was going on in ancient Russia at the time and hostile Western forces attempted to exploit this domestic disagreement. “Under a specious excuse of bringing Christian values. Bring how? The way they can do it now – by fire and sword. What helped our ancestors to survive in this most complicated geopolitical situation? Slavic brotherhood, unity. A clear understanding of who was the enemy and who was the brother,” the head of state said.

Alexander Lukashenko recalled that in the face of an external threat, Slavic nations could forget grievances, stop quarrels and stick together to protect their common home. This is how the Grand Duchy of Lithuania, Rus and Samogitia was born.

The president also noted that who oversaw the creation of the grand duchy is now hotly debated. Alexander Lukashenko previously said that the Lithuanians had privatized the heritage of this great state. Now he suggested finding out what the Lithuanian state had. “The language was ours. The same language was used to write the constitution. Orthodox Christianity was the dominant religion. The territory included Belarusian, Ukrainian and partly Russian lands. The Belarusian lands and the Belarusian ethnicity constituted the state. The people were more than 80% owned by us. They were Slavs. And all these – the territory, the people, the language, the cultural traditions – are the main attributes of a State. There is no sovereignty without these attributes. From our Belarusian state. It was at this time that the Belarusian ethnic group was born, ”said Alexander Lukashenko.

The head of state pointed out that while Roman law was dominant in Western Europe, the ancient Belarusians lived according to their own laws and did not run after European fashions. And Lithuanians didn’t have a written language at all back then. “Who defeated whom after all? We were masters in our own country,” said Alexander Lukashenko.

During the public lesson, the president recalled a heroic act committed by the ancestors. In his words, Slavic unity helped stop German aggression for over 500 years. The regiments of Orsha, Mstislavl and Smolensk showed special tenacity and courage in the battle of Grunewald. “The Polish historian Jan Dlugosz wrote about this. He wrote about it right after the battle by historical standards, only decades later,” Alexander Lukashenko remarked.

The president said that this heroic deed of ancient Belarusians has not yet been worthily assessed. “And I’m confident that our historians (perhaps you after getting the proper training) will,” he said.

The story became more interesting later, Alexander Lukashenko remarked. Those who were allied with the Belarusians in the Battle of Grunewald betrayed them. During the Livonian War, the ruling elite of the Kingdom of Poland opposed the Grand Duchy of Lithuania and the Tsardom of Russia.

“Poland seized Ukrainian lands and forced the Grand Duchy of Lithuania to sign the Union of Lublin. They wanted our land even then. This idea still excites the Polish elites,” is convinced Alexander Lukashenko.

Commenting on the creation of the Polish-Lithuanian Commonwealth (Rzeczpospolita), Alexander Lukashenko remarked that it was founded by treason. “Riddle me this: is it possible to create a strong state based on deceit, betrayal, cunning and the oppression of nations? Certainly not,” the president said.

But the Polish-Lithuanian Commonwealth was created in this way. According to Aleksandr Lukashenko, this represents a stark example of how a union state should not be established. “You must not take away the language, culture and faith of an allied nation. You can’t belittle his dignity. But it happened in the Polish-Lithuanian Commonwealth. What is a state based on? Its inhabitants. And what can he rely on when part of the nation is destroyed and society suffers from a spiritual and cultural divide? asks the Head of State.

Alexander Lukashenko pointed out that with this internal policy the Polish-Lithuanian Commonwealth could not be a strong state and fell. “They finished it as they started it: dividing up the land between neighbors,” he said.

“Our ancestors were part of the Trinitarian nation constituting the State of the empire: the Great Russians, the Belarusians and the Little Russians. In other words, Russians, Belarusians and Ukrainians. Our nation would have fallen if the Polish-Lithuanian Commonwealth had not been divided. At best, we would have called ourselves Orthodox Poles, just as tens of thousands of inhabitants of the modern Bialystok Voivodeship call themselves today, ”said Alexander Lukashenko. “The Russian Empire was also our country. We knew that we lived on our own land and we fought for it in 1812 against the European troops gathered by Napoleon.

Still, the president admitted that Belarusians face many disadvantages in the Russian Empire. Alexander Lukashenko pointed out that at the time, Europe traditionally professed its values: mythical freedom, equality and brotherhood. “Again by sword and cunning, playing with the dreams of the Polonized nobility to restore a Polish state. But our ancestors did not fight for the Polish-Lithuanian Commonwealth. They fought for their homeland with the Russian army. And this war was a patriotic war for us and for the Russians, whatever the pro-Western liberal historians say,” the president stressed.

Alexander Lukashenko also mentioned the oppression practiced by the Polish nobility and the Belarusian People’s Republic – a state on paper. “World War I. Again against the West. Revolutionary shocks, occupation and economic disasters added to the war. What about our neighbors represented by the Polish elites? They started a Polish-Soviet war with the same idea: to take over a slice of our land. And they almost succeeded,” he noted.

Alexander Lukashenko recalled that the Belarusian nation was divided by the Riga Peace for almost 20 years: “Our ancestors in western Belarus again felt the whips of the Polish nobility: Polonization, confession and social oppression and economic”. “It is surprising that we have managed to survive in this turmoil. Moreover, we have begun to build our national state. And I would like to make a remark: on the Soviet foundation instead of under the Kaiser’s boot as individual figures of the Belarusian People’s Republic tried to do. The Belarusian People’s Republic existed only on paper,” the president noted.

Fingers pointed at Kyiv are now turning to Israel