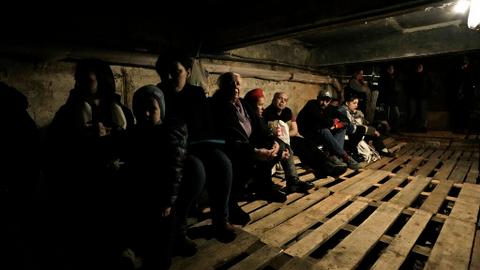 Russia has advanced its strikes towards towns in western Ukraine where the majority of civilians have taken refuge as the conflict enters its 32nd day.

“I have been released. Everything is fine, as far as possible under the occupation,” Yuri Fomichev, mayor of Slavutych, told AFP news agency by telephone after officials in Kyiv, the Ukrainian capital, announced earlier that he had been arrested.

Earlier, the Kyiv region military administration, which covers Slavutych, announced that Russian troops had entered the city and occupied the municipal hospital.

US tech company Maxar Technologies has provided the latest satellite images after the Russian attack on the capital Kyiv and surrounding towns.

The Izyum TV and radio tower, a fuel depot in Kalynivka, and buildings in Irpin and Horenka were destroyed in the Russian attacks.

Ukrainian President Volodymyr Zelenskyy, visibly irritated, asked Western countries to provide a fraction of military equipment from their stocks and asked if they were afraid of Moscow.

Ukraine only needed 1% of NATO’s aircraft and 1% of its tanks and would not ask for more, he said.

“We have been waiting for 31 days already. Who is in charge of the Euro-Atlantic community? Is it really still Moscow, because of intimidation? he added.

What is the price of this security? These are aircraft, tanks, missile defense, anti-ship weapons for Ukraine. This is what our partners have… After all, this is not only for the freedom of Ukraine, but for the freedom of Europe.

Russian sanctions can be lifted with conditions — UK

British Foreign Secretary Liz Truss has said British sanctions against Russia for its aggression against Ukraine could be lifted if Moscow commits to a full ceasefire and withdraws its troops.

“Sanctions should only be taken with a full ceasefire and withdrawal, but also commitments that there will be no more aggression,” Truss told The Sunday Telegraph.

“And also there is the possibility of having stimulus sanctions if there are further assaults in the future.”

For live updates from Saturday (March 26), Click on here

Outreach program will donate one million meals to Ukraine