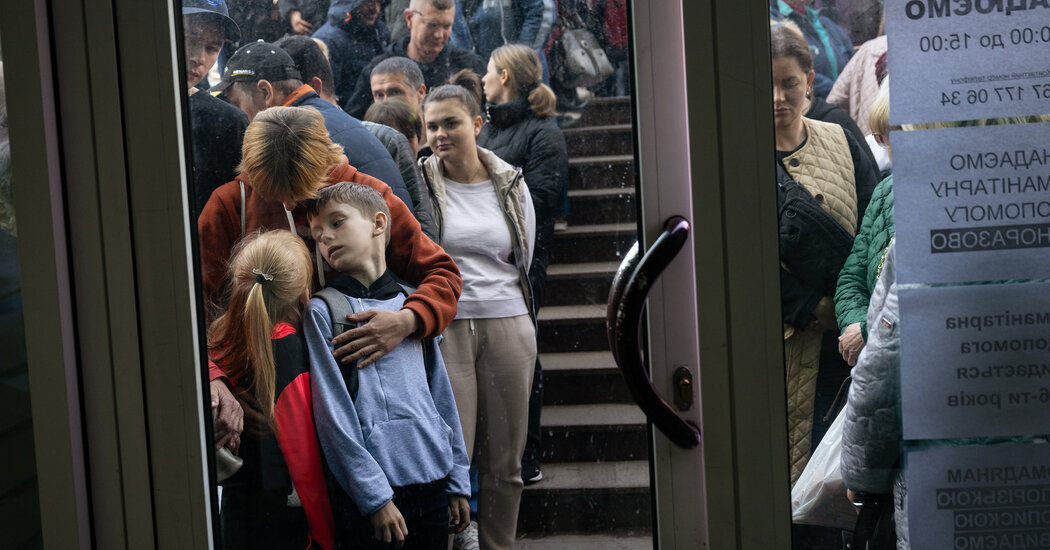 KYIV, Ukraine – Russian tanks were crossing the border and Kyiv, the Ukrainian capital, was gripped by fear and panic. Street fighting broke out and a Russian armored column, entering the city, advanced within three kilometers of President Volodymyr Zelensky’s office.

During those tense early days of the war, almost everyone — Russian President Vladimir V. Putin, military analysts and many Western officials — expected Ukraine’s leadership to fracture. Instead, Mr Zelensky decided to personally stay in the capital, taking selfies as he drove through kyiv to reassure his people. And he ordered his top aides, many Cabinet members and much of his government to also stay put, despite the risks.

It was a moment of crystallization for Mr. Zelensky’s government, ensuring that a wide range of agencies continue to operate effectively and in sync. Leading politicians set aside the bitter infighting that had defined Ukrainian politics for decades and instead created a largely united front that continues today.

No senior civil servants defected or fled, and the bureaucracy was quickly put on a war footing.

“In the first days of the war, everyone was in shock and everyone was wondering what to do – stay in kyiv or evacuate,” said Serhiy Nikiforov, spokesman for Mr Zelensky. “The president’s decision was that no one is going anywhere. We stay in kyiv and we fight. It cemented him.

For much of the world, Mr Zelensky is best known for appearing via video link with a daily message of courage and defiance, to rally his people and urge allies to provide arms, money and moral support. On Sunday, he again caught the world’s attention during a meeting in Kyiv with two senior US officials, Secretary of State Antony J. Blinken and Secretary of Defense Lloyd J. Austin III, who promised a increased military support and – in a gesture of symbolic importance – said the United States would seek to reopen its embassy in Kyiv.

But behind the scenes, Mr Zelensky’s success so far also hinges on the government’s ability to operate smoothly and take steps to help people cope, such as sweeping deregulation to keep the economy afloat. and provide essential goods and services.

By relaxing the rules for transporting goods, for example, the government was able to deal with a serious risk of food shortages in the capital, Kyiv, at the start of the war. And in March it lowered business taxes to 2% – and only if the owner wanted to pay.

“Pay if you can, but if you can’t, there’s no question,” Mr Zelensky said at the time.

More controversially, it combined six television stations that previously competed with each other into a single outlet for news. The merger, he said, was necessary for national security, but it frustrated political opponents and free speech advocates.

He also reached a truce with his main domestic political opponent, former President Petro O. Poroshenko, with whom he had argued until the start of the war.

A huge wartime effect of the gathering around the flag undoubtedly made Mr. Zelensky’s job easier, said Volodymyr Yermolenko, editor of Ukraine World, a magazine covering politics. “The peculiarity of Ukrainian politics is that the agency comes from society, not from political leaders,” he said. “Zelensky is his due to the Ukrainian people, who are behind him, showing courage.”

He added that “this is not to undermine his efforts” and credited Mr Zelensky with adapting his pre-war populist politics into an effective leadership style in the crucible of conflict.

These days, Mr. Zelensky’s workplace on Bankova Street is a quiet, dark space filled with soldiers; there are firing positions protected by sandbags in the corridors and on the landings of the stairs. “We were ready to fight exactly in this building,” Nikiforov said.

A former comedic actor, the Ukrainian frontman has surrounded himself with a band of loyalists from his television days, relationships that have drawn accusations of cronyism in the past but served him well during the conflict by keeping his team of direction on the same wavelength. And Mr. Zelensky has structured his days in a way that suits him.

Mr. Zelensky receives individual telephone briefings from General Valeriy Zaluzhnyi, the commander of the armed forces, several times a day and often in the first hour of the morning, aides and advisers said.

This is followed by a morning videoconference with the prime minister, sometimes other Cabinet members, and heads of military and intelligence agencies in a format that combines military and civilian decision-making, according to Nikiforov, his spokesperson.

Certainly, Mr. Zelensky’s video speeches – to the US Congress, the British Parliament, the Israeli Knesset and other governments – remain the defining and most effective element of his wartime role. The Ukrainian and Russian armies are still in pitched battles on the eastern plains, but in the information war kyiv has clearly won.

Delivered with passion by a former actor with a keen eye for storytelling and drama, Mr. Zelensky’s speeches rallied his compatriots and galvanized international support.

Some are improvised and others more scripted. A 38-year-old former journalist and political analyst, Dmytro Lytvyn, was reportedly Mr Zelensky’s speechwriter. Mr. Nikiforov, the spokesman, confirmed that the president was collaborating with a writer but declined to say with whom.

Politically, Mr. Zelensky took early steps that enabled him to reduce any internal conflict that could harm the war effort.

Among them was the rocky rapprochement with Mr. Poroshenko, who had sharply criticized Mr. Zelensky since losing to him in the 2019 election. Their bickering continued even as Russia massed troops on the border, Mr. Zelensky putting Mr. Poroshenko under house arrest for various politically tinged cases.

But the day Russia invaded, the two leaders reached an agreement. “I met Mr. Zelensky, we shook hands,” Mr. Poroshenko said in March. “We said we were starting from scratch, he can firmly count on my support, because now we have an enemy. And the name of that enemy is Putin.

It helped that Mr Zelensky’s political party, Servant of the People, won a majority of seats in parliament in 2019, allowing him before the war to appoint a cabinet of loyalists. Previous Ukrainian governments were divided between conflicting presidents and opposition-controlled cabinets.

Tymofiy Mylovanov, a former economy minister and now an economic adviser to the president’s office, compared Ukrainian politics to “fighting between relatives”.

“It’s a family fight,” he said. “But family comes first.”

The inner circle is largely made up of media, film and comedy industry veterans with similar backgrounds to Mr. Zelensky.

Andriy Yermak, chief of staff and former film producer, is widely regarded as Ukraine’s second most powerful politician, although the constitutional successor is Speaker of Parliament Ruslan Stefanchuk, who at the start of the war was evacuated to western Ukraine. Mr. Yermak oversees foreign and economic policy.

Other key advisers are Mykhailo Podolyak, a former journalist and editor who negotiates with the Russians; Serhiy Shefir, a former screenwriter, now a domestic political adviser; and Kirill Tymoshenko, a former videographer who now oversees humanitarian aid.

The military high command is made up of officers, including General Zaluzhnyi, experienced in fighting Russia during the eight-year conflict in eastern Ukraine.

In the early days of the war, Mr. Zelensky set three priorities for his government’s ministries, according to Mr. Mylovanov: procuring arms, shipments of food and other goods, and maintaining supplies in gasoline and diesel. Ministries were asked to rewrite regulations to ensure timely delivery on all three strands.

This may have been very helpful in the early rush to get food to kyiv, which was in danger of being besieged and starving.

With the supply chain disrupted, the presidential office brokered an agreement between grocery chains, trucking companies and volunteer drivers to establish a single trucking service supplying all grocery stores. Stores would post a request on a website and, depending on the available driver, fill the order either for free or for the cost of gas.

Perhaps Mr. Zelensky’s most controversial decision was to combine all six TV newsrooms into a single channel with a single story. The main opposition television channel, Channel 5, affiliated with Mr Poroshenko, was omitted from the group.

Mr. Zelensky called the move necessary for national security. Opponents saw it as a disturbing example of the government’s crackdown on dissent.

“I hope wisdom will prevail, and the intention is not to use this to reduce political competitors,” said Volodymyr Ariev, a member of Mr Poroshenko’s Solidarity political party.

Transparency in the Ukrainian Parliament has also been a casualty of the war.

Parliament sits at irregular and unannounced intervals of around an hour, for security reasons, for fear of a quickly targeted Russian cruise missile strike.

To hasten sessions, MPs do not debate bills publicly in the chamber but privately as they are drafted, according to Ariev. Afterwards, the parliamentarians gather in the majestic neo-classical hall, take a quick vote, then disperse.

“Don’t worry,” he said. “We’re going to start fighting again for liberal versus protectionist economic policy, price controls, how to attract investment, and everything else.”