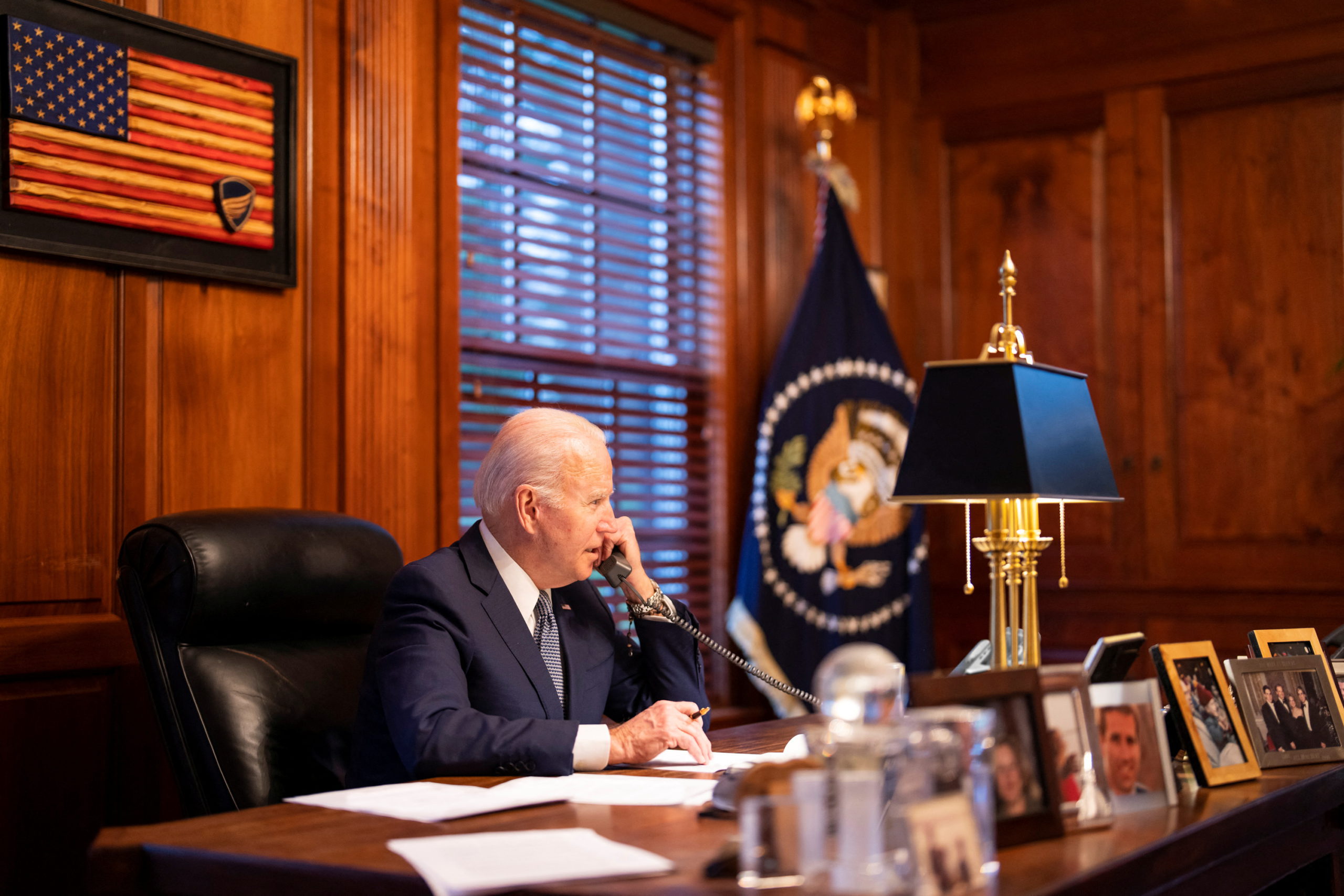 For the second time in three weeks, the Presidents of the United States, Joe Biden, and of Russia, Vladimir Putin, on Thursday spoke by telephone of the tension around the Ukrainian border, in front of which the Kremlin concentrated thousands of troops in over the past two months. The contact, at Putin’s request, anticipates the bilateral meeting that the United States and Russia will hold on January 10 in Geneva, in which neither of the presidents will participate. Russian Deputy Foreign Minister Sergei Ryabkov and US Under Secretary of State Wendy Sherman will negotiate on his behalf.

Moscow is insisting on bringing a series of demands to the meetings, including legal guarantees that NATO will not carry out military reinforcements at Russia’s European borders, especially those of Ukraine. Russian President’s spokesman Dmitry Peskov said ahead of the call, which lasted 50 minutes, that it would be “a continuation of the discussion that started with the virtual meeting” three weeks ago. , and that they would address the issues there. planned for the January agenda. “The talks have only one goal: to reach a compromise taking into account the position of the other,” Peskov said, stressing that Moscow believes that “only negotiations can solve the many pressing problems.” “We’re ready for a conversation, we want this conversation,” he said.

Washington sees Russia’s movements on its border with Ukraine as an attempt to redraw the map of Europe’s eastern flank. Although the White House defends diplomatic channels as a first option, it has also warned that it has prepared a battery of sanctions against the Russian economy and financial system if the Kremlin breaks with it. the status quo. These went “well beyond those of 2014”, when Moscow annexed the Ukrainian peninsula from Crimea and sponsored the eastern Ukrainian rebellion against Kiev. “We are prepared for diplomacy and to move forward on this path, but also to respond if Russia goes any further with a possible invasion of Ukraine,” a senior official in the Biden administration warned on Wednesday. call with journalists.

Washington does not see the slightest sign of de-escalation on the ground. â€œWe continue to see a significant presence of Russian troops around the Ukrainian border. And President Biden has indicated to President Putin that for there to be real progress, and for us to achieve a scenario of security and stability in Europe, a context of de-escalation will be necessary, â€the official explained.

The Kiev government has eased the tension by saying it sees no clear threat of aggression from Russia. â€œYes, there is an increase in the forces of the army. But we do not see any significant concentration at our borders, as some foreign media have reported, â€Ukraine Security and Defense Council Secretary Oleksiy DanÃ­lov said yesterday, according to Interfax news agency. .

Join MRT to follow all the news and read without limits.

Washington maintains its commitment to agreements on the crisis in eastern Ukraine, the senior White House official stressed. But still under a multilateral diplomatic umbrella that Russia seems reluctant to assume. â€œRussia has presented a proposal for a comprehensive agreement between Russia and NATO. This obviously needs to be discussed in the context of NATO. And the issues related to Ukraine are part of the OSCE context, â€said the White House source.

Three weeks of frantic multi-party negotiations have made it clear that the United States does not want to act alone on this thorny issue. Secretary of State Antony Blinken contacted Ukrainian President Volodymyr Zelenski and his British, French and German counterparts on Wednesday. The Kremlin, on the contrary, is more inclined to deal directly with the White House, while urging the United States to revert to international agreements that President Donald Trump has abandoned.

Russia has already set out its demands for what it sees as “security guarantees”. These proposals were released by the Foreign Office on December 17, and Washington’s silence in the following days made the Kremlin impatient. Four days later, Putin held a meeting with the leadership of the army in which he threatened to take “technical-military retaliatory measures” if NATO protected Ukraine, among other countries. Moscow considers it under its orbit. â€œWe need binding long-term guarantees (â€¦). We know that, even with legal guarantees, we cannot believe the United States because they easily withdraw from international agreements, â€warned Putin, Commander-in-Chief of the Russian Federation, his high command.

The Russian Foreign Ministry has published a draft containing its proposals “to prevent dangerous military activities and reduce the likelihood of incidents between its armed forces”. According to the Russian proposal, the Atlantic Alliance “assumes the obligation to prevent NATO expansion to other states, including the accession of Ukraine”, and refuses to conduct military exercises in this region, the Caucasus and Central Asia. In addition, Moscow demands that the Alliance “undertake not to deploy its armed forces and weapons on the territory of all other European countries” and, in the event of a security threat, that the deployments be carried out only ” with the consent of all participants â€. . In other words, in a war like the one in Donbass, Russia should give the green light to send weapons from the United States to Kiev.

Hours before the phone call, the spokeswoman for the Russian Foreign Ministry reiterated two of the key ideas for Moscow: that NATO should not admit more Eastern countries and that the United States return to the international agreements. The Kremlin demands that Washington â€œtangiblyâ€ demonstrate its intention to revert to the 2015 Iranian nuclear pact, which it abandoned in 2018 under the Trump presidency.

â€œIt’s not about making a new deal. It will take a methodical effort, literally piece by piece, to mend the balance lost by the actions of the United States, “said the spokesperson, who threw another dart, adding that” of course, the status of violator of a UN Security Council resolution makes Americans uncomfortable. The White House noted that the nuclear pact with Iran would be on the table in yesterday’s call, although it highlighted the “really constructive talks” taking place in Vienna.

Between Moscow and Washington and, by extension, NATO, there are more outstanding disputes than that of eastern Ukraine. The installation of Iskander missiles in the Russian enclave of Kaliningrad in 2018 and Washington’s withdrawal from the Medium and Short-Range Missile Treaty in 2019 are seen as a threat by their counterparts.

“The frequency of contacts between the actors clearly shows their interest in finding a result worthy of the name,” explains Aleksandr Borisov, professor at the International Institute for Foreign Relations in Moscow. For the Think tanks the more pro-Kremlin, the responsibility for the current situation falls more heavily on the West. â€œThe Americans and their NATO allies have gone too far in portraying Russia as an antagonist, and Russia, as Putin said, has nowhere to retreat,â€ Borisov added in an exchange of views. ’emails before quoting a line from German Chancellor Otto von Bismarck on the Slavic country: â€œThere are 100 ways to get a Russian bear out of a den, but not one way to get it in.

Ukraine plans to host EuroBasket: where new arenas will be built in Kiev, Lvov and Dnipro