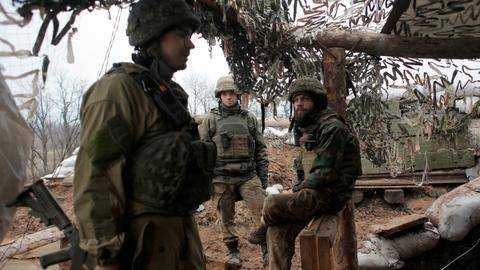 Has the Ukrainian peace process stalled?

Moscow is not interested in making peace with Kiev with the intention of prolonging the conflict, forcing Ukraine to speak to Russian-backed separatists in the Donbass region.

Moscow’s military build-up last month, which gathered up to 100,000 troops on Ukraine’s eastern border, raised fears that Kiev’s conflict with Russia-backed rebels in the eastern part of the country could end. dangerously dispels.

The escalation of tensions, which led Ukrainian leaders to call on NATO to pave the way for Kiev to join in a bid to protect itself from the Atlantic alliance against Russia, appears to be easing after a partial withdrawal from Russia. At the time, much of the West – under the leadership of the United States – offered strong support to Ukraine against any Russian aggression.

Officially, however, Moscow has shown no intention of reaching an agreement with Kiev in order to re-energize the deadlocked Minsk peace process. It is led by the Norman group, made up of Germany, France, Russia and Ukraine, which is trying to resolve the conflict between the Moscow-backed separatists in the Donbass region and the Ukrainian central government.

In 2015, after fighting killed more than 14,000 people in eastern Ukraine as part of the Minsk process, Germany and France negotiated a political deal that appeared to largely concede to Russian demands, such as offering broad autonomy in the separatist regions. The agreement also provided that Ukraine, which had not had full control of its eastern border since 2014, would only regain its access if Kiev allowed local elections.

While Ukraine signed the 2015 accord, much of its establishment viewed its provisions as a threat to its national security and territorial unity. Last week Ukrainian President Volodymyr Zelensky, a former comedian, demanded a modification of the agreement in order to prioritize control of Kiev on the border. Zelensky wishes to consider recognizing the autonomy of the eastern regions after taking control of the border.

Zelensky’s call was met with a strong rebuke from Moscow, which claims it is not a party to the Ukrainian conflict. He sees it as an internal political issue.

“The border control is the very last initiative that comes only after these territories obtain a special status fixed in the Ukrainian Constitution and organize free elections recognized as such by the Organization for Security and Cooperation in Europe,” said Russian Minister Sergey Lavrov said last. week.

“I think we should not let Mr Zelenskyy and his team get away with it, even if they try to get away,” Lavrov added.

From a legal point of view, Ukraine’s delay in bringing it into compliance with the 2015 agreement seems to give political weight to Russia in its refusal to engage in new talks with Ukraine and the United States. Western countries.

â€œThe West cannot or will not encourage respect for the Minsk accord,â€ Lavrov noted.

Zelensky also demanded a change in the Minsk framework, bringing the group two new members, the United States and the United Kingdom, both of which are fiercely anti-Russian forces. On Wednesday, US Secretary of State Antony Blinken will travel to Kiev to discuss the latest developments with his Ukrainian counterparts.

Putin does not speak

So far, Russian President Vladimir Putin has refused to meet with his Ukrainian counterpart, Volodymyr Zelensky, who last month urged one-on-one talks with Putin – who in turn advised Zelensky to speak to Moscow-backed separatists to find peace in the country. is. For the Ukrainian leadership, this would amount to an overhaul of the country’s political structure to appease the separatists.

“Putin has shown that he has not the slightest desire to cede anything interesting to Zelensky and even less to reach a peace agreement,” said Danylo Lubkivsky, director of the Kyiv Security Forum.

â€œUkraine is committed to peace and is ready to do everything in its power to achieve such peace. However, it takes two parties to want peace and Moscow’s recent bellicose behavior has cast significant doubt on its intention, â€said a Ukrainian presidential adviser. the Financial Times.

In 2014, Russia annexed the Crimean Peninsula to Ukraine while a powerless Kiev saw its Black Sea region slip from its hands to those of Moscow. Likewise, immediately after the annexation of Crimea, Putin appeared to support separatists in eastern Ukraine to weaken the political power of the West-backed Kiev.

If Ukraine grants autonomy to the Donbass region, it will also complicate its efforts to join both NATO and the EU. The two Western political institutions will approach cautiously to integrate a country whose eastern regions are under Russian influence.

As a result, by creating a political deadlock in eastern Ukraine, Putin achieves several important political goals. While increasing the influence of Russia on the political decision-making process in Kiev, Putin is also effectively using the Donbass region’s demand for autonomy as a political measure to maintain a certain distance between Ukraine and the Western powers. .

Despite the West’s firm reaction to Russia’s military deployment in April, which included nuclear-capable short-range missiles, instantly escalating the conflict, Putin also showed Ukrainians and Western states that he was in control of the conflict. , according to Kurt Volker, a former US special representative in Ukraine.

â€œPutin, therefore, underlined a key political point that he has been making for years: the West can talk about a good game, but Ukraine cannot count on the support of the West. He is intrinsically linked to Russia and has to get along with the Kremlin, â€Volker wrote.

Shevchenko: My Kiev friends are all dead