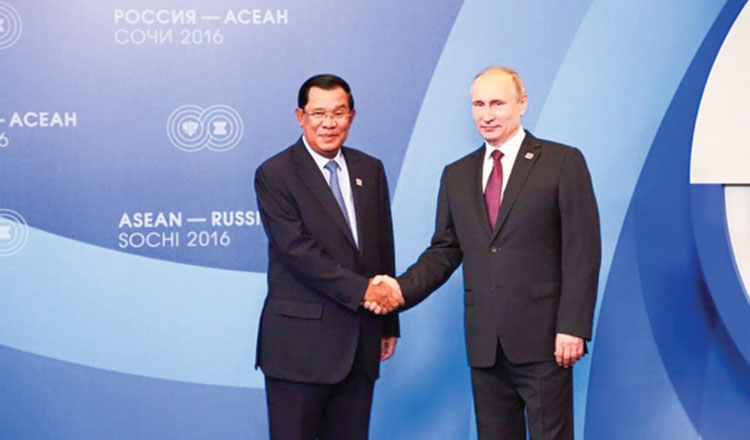 “Friends may have different opinions”

Russia and Cambodia are linked by long-standing ties of friendship, but sometimes even friends can have differences of opinion on the developments around them.

Rafael Langareev, press secretary of the Russian Embassy in Cambodia, said that the current situation in Ukraine is one such problem, but that Russia’s principled position is to respect the sovereignty of the Kingdom, which acts as an independent and sovereign state in defining and implementing its homeland. and foreign policy.

“In accordance with the spirit of our traditional friendship and mutual understanding, the Russian Federation is doing its best to elucidate the genesis of the Ukrainian conflict and the real causes that forced Russia to launch the special military operation in Ukraine” , did he declare.

“We present our actions and current developments in this area candidly with strong factual backing, unlike some countries that take the liberty of descending into baseless speculation,” he said yesterday.

Rafael said that since the 2014 unconstitutional coup in Ukraine, “Western countries have bombarded the kyiv regime with weapons, making Ukraine anti-Russian and creating a military threat to the Russian state ever since. his territory”.

They ignored the suffering of the people of Donbass (in south-eastern Ukraine) during the punitive operation launched by the authorities in kyiv in 2014, the eight years of continuous bombing of Donbass, the systematic attacks and large-scale against rights and freedoms there, as well as the constant efforts to inculcate neo-Nazism, he noted.

“For years, the West has turned a blind eye to Russia’s security concerns, including those regarding Ukraine’s training in NATO activities,” he added.

He said the dangers Zelensky’s regime poses to neighboring countries and international security in general have increased significantly after the authorities moved into Kyiv and began preparations for another punitive war against the people of Donbass. and even started dangerous games related to plans to acquire their own nuclear weapons.

However, the crisis in Ukraine only returned to the media spotlight after the Russian Federation was forced to react and defend the people of Donbass, its own citizens from the kyiv regime.

Cambodian Foreign Ministry spokesman Chum Sounry could not be reached for comment yesterday.

Government spokesman Phay Siphan said Cambodia has never viewed any foreigner as an enemy, especially Russia, which has had relations with Cambodia for more than 60 years.

The two countries have close ties and cooperate in many fields, including the military, education, health and many sectors.

“Cambodia and Russia are bound by longstanding ties of traditional friendship and mutual respect; the two countries have close approaches to the problems of the world order,” added Siphan.

“Cambodia has made it clear that it does not want to see the use of military force between countries and other countries,” he said.

In order to expand broad relations with Cambodia, as well as with Southeast Asia in terms of politics and economy, he recommended that Russia consider the possibility of investing in the energy sector. such as gas and oil, the agricultural sector.

He said that the relations between the two countries will continue to strengthen and diversify in many areas of common interest.

Solidarity between the two countries in addressing urgent international challenges, solid experience in bilateral dialogue, accelerating contacts at all levels on various platforms, deep-rooted mutual understanding and respectful approach will undoubtedly guide them. towards greater achievements both nationally and globally, added Phea. .