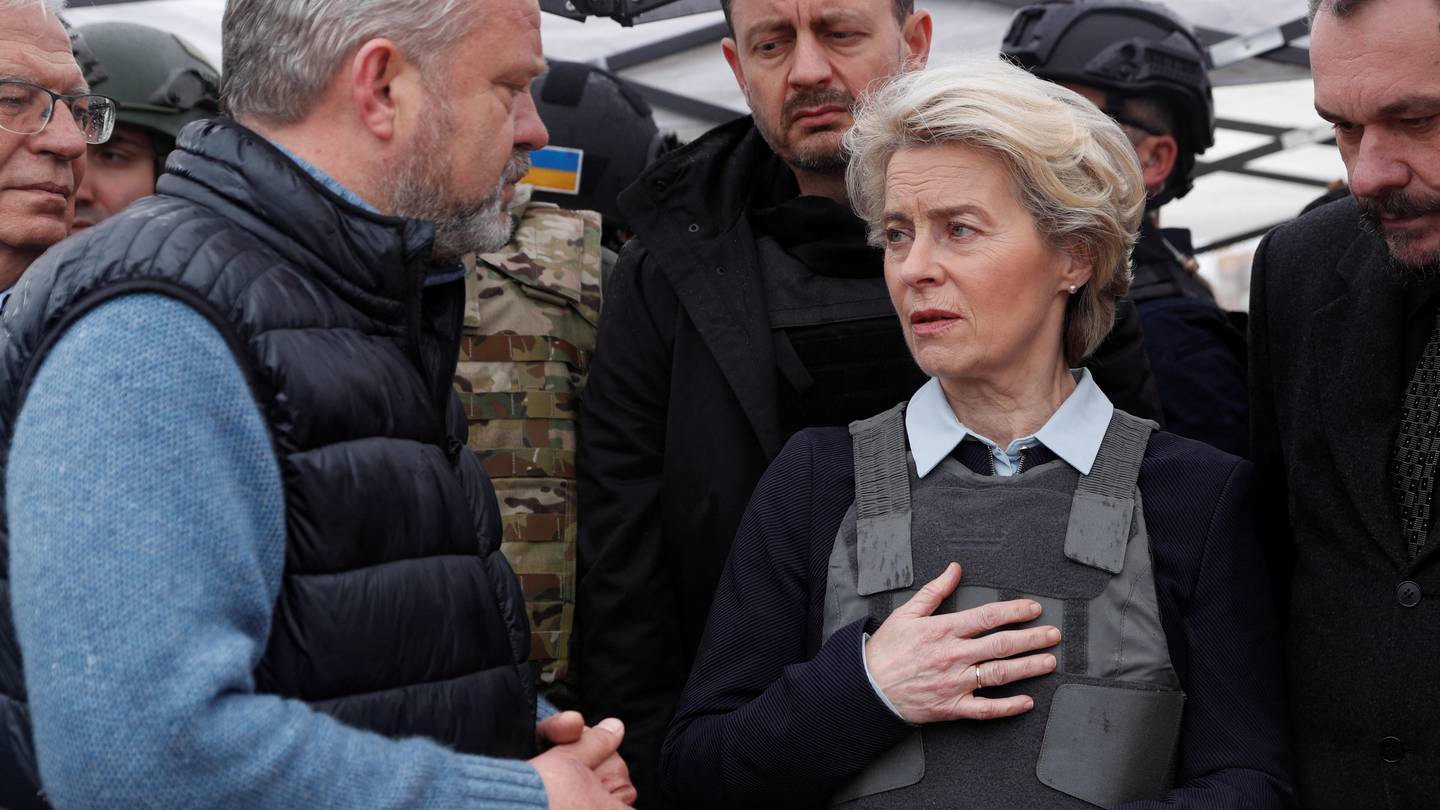 Two senior European Union officials traveled to Ukraine on Friday in a show of solidarity with the country after the withdrawal of Russian forces from the capital.

European Commission President Ursula von der Leyen was visibly moved during a visit to Bucha, the town near kyiv where evidence of an apparent massacre was discovered after the end of the Russian occupation.

She also gave Ukrainian President Volodymyr Zelenskyy a form that could become the basis of an application for EU membership.

“The unthinkable happened here. We saw the cruel face of [Russian President Vladimir] Putin’s army. We have seen the recklessness and coldness with which they occupy the city,” she said.

She and Josep Borrell, the EU’s top diplomat, traveled by train from Poland for their first meeting with Ukraine’s president since the invasion of Russia in February. They were joined by Slovak Prime Minister Eduard Heger.

This makes it the highest European delegation to have visited Kyiv since the start of the war, after the prime ministers of Poland, Slovenia and the Czech Republic as well as the president of the European Parliament have already visited the city. .

Handing Mr Zelenskyy a questionnaire, which will be a starting point for the EU to decide on Kyiv’s membership, she said: “As usual, it will not be a matter of years to forge this opinion, but I think a matter of weeks.

Mr Zelenskyy said he would be back with answers within a week.

While Mr Zelenskyy reiterated his call for tougher sanctions, Ms von der Leyen said the EU was mobilizing its economy to ensure that Mr Putin paid a heavy price.

The EU is also set to ban coal imports from Russia after ambassadors from the bloc’s 27 countries endorsed the proposal on Thursday evening.

A potential second stage ban on oil deliveries will be discussed on Monday. Ukraine wants the EU to complete the package by stopping gas imports on which it depends most.

Before the arrival of EU leaders, as many as 50 people were killed and many more were injured in a rocket strike on a train station crowded with civilians fleeing the threat of a major Russian offensive in the east of the country.

It was important to start my visit to Bucha.

Because in Bucha, our humanity was shattered.

My message to the people of Ukraine:

Those responsible for the atrocities will be brought to justice.

Your fight is our fight.

I am in kyiv today to tell you that Europe is on your side. pic.twitter.com/oVEUOPDuD6

Ukraine has lobbied the EU to fast-track its application for membership, an idea supported by many countries in the eastern part of the bloc but viewed with more skepticism by senior leaders in the West.

The visit comes after Russian forces halted their offensive towards kyiv and drove troops away from the capital, revealing evidence of massacres in a number of towns.

The reported atrocities have prompted Ukraine’s allies to demand more action and prompted the EU to impose sanctions on Russia’s lucrative energy sector for the first time.

Mr Borrell said this week that in the EU of 27 it is Russia that pays 1 billion euros ($1.09 billion) a day for energy supplies, which is more than 35 billion euros. euros since the start of the war and eclipses its military aid to Ukraine.

Mr Zelenskyy said continued payments would be viewed in Moscow as “a license to go further” in attacking Ukraine and would allow Russia “not to take negotiations over ending seriously”. of the war”.

The sanctions package agreed on Thursday, the fifth in the EU since the Russian invasion, also includes a ban on port access for Russian ships and new restrictions on trade.

“The EU is on your side,” von der Leyen told Zelensky in Kyiv