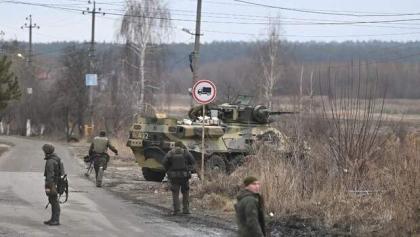 The EU’s six largest countries refrained from supplying Ukraine with new weapons systems in July, an indication of the West’s arms shortage and an understanding that kyiv is losing its conflict with Russia, Xavier Moreau, arms expert and geopolitical analyst from France think tank Stratpol, says Sputnik

BRUSSELS (UrduPoint News/Sputnik – Aug 18, 2022) The EU’s six largest nations refrained from supplying Ukraine with new weapons systems in July, an indication of the West’s arms shortage and a understanding that kyiv is losing its conflict with Russia, Xavier Moreau, an arms expert and geopolitical analyst at French think tank Stratpol, told Sputnik.

Kyiv, which relies heavily on military and financial aid from the European Union, received just 1.5 billion euros ($1.5 billion) in support last month, according to a tracker from the ‘Kiel Institute for the World Economy. The updated information showed that no major EU member state such as the UK, France, Germany, Spain, Italy or Poland has made at least some pledges. little significant.

“The arsenals have been largely exhausted in Europe where the armies do not have huge stocks, especially of ammunition. Europe is also limited in its means of production: we no longer have the arms industries that European countries had before the first and second world wars. and which could rapidly produce huge quantities of ammunition,” said Moreau, adding that EU member states had realized Ukraine’s failure to win the conflict and, therefore, had lost interest in sending expensive armaments to a country that would never pay for them.

Based on these facts, support for Kyiv is becoming much less popular among Europeans, especially amid the energy crisis, continued inflation and declining citizen incomes, according to the expert. In this regard, EU governments are trying to compensate for the reduction in arms supplies with an increased propaganda effort, sometimes to the point of absurdity, the analyst added.

“Western governments can only bear the heavy consequences of the sanctions imposed on Russia if there is a meaning to the conflict; and for European governments, the expected meaning is that Ukraine wins.

There is no chance that Ukraine will win and so we are witnessing a headlong rush of propaganda,” Moreau told Sputnik.

kyiv notably announced a major offensive in the south, in Kherson, which in fact never took place since the Ukrainian army is simply incapable of such an operation, notes the expert. Recent propaganda has also focused on commando operations in Crimea and Kursk in Russia, where a Russian military truck hit a mine in early August.

According to Moreau, Ukrainian armed formations are capable of organizing specific actions on Russian territory, such as sabotage in the Crimea, but these moves are more like terrorist acts and cannot be compared with the losses suffered by the kyiv army on the whole forehead. .

“What’s left of Ukraine to the west and around kyiv makes no economic sense since Russia has already reclaimed most of the ‘useful’ Ukraine,” the expert concluded.

On February 24, Russia launched a military operation in Ukraine in response to calls for help from the separatist republics of Donetsk and Luhansk. Western countries and their allies have responded by imposing comprehensive sanctions on Russia while stepping up financial and military support for Ukraine.

Moscow has repeatedly denounced the continued flow of arms to Ukraine from its Western allies, saying it was adding fuel to the fire and derailing the negotiation process. In April, Russia sent a note to NATO member states condemning their military assistance to Ukraine.