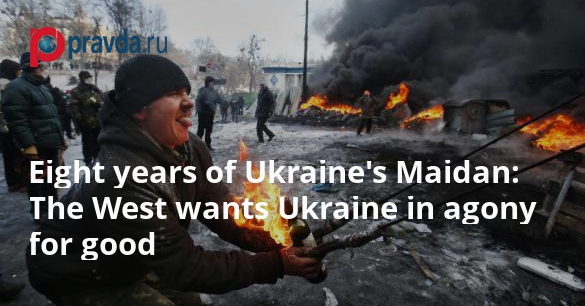 The Ukrainian Maidan, also known as the “revolution of dignity”, turned eight on November 21, 2021.

It was the tweet of then journalist, and now senior Ukrainian official, Mustafa Nayyem, that turned the local rally of supporters of European integration into a massive event with the participation of thousands of protesters. The reporter then posted a tweet urging everyone to gather outside the Independence Monument in central Kiev and bring warm clothes, tea, coffee and a good mood.

The fateful tweet marked the climax of the inconsistent policy pursued by then-Ukrainian President Viktor Yanukovych, who initially expressed his intention to strike a trade deal with the EU and join forces with it. European Union, then preferred to backtrack so as not to lose the Russian markets.

However, it turned out that a large number of Ukrainians had already developed the idea of ​​Ukraine’s integration into Europe at that time. They believed that Ukraine was not Russia, which means that the Ukrainian administration was supposed to end relations with Russia as drastically as possible.

What did the Maidan rioters represent at the end? To simplify as much as possible, they stood for all good and against all evil. Generally speaking, it could be the idea of ​​any color revolution.

As for the “revolution of dignity”, the demonstrators demanded:

On top of that, they wanted to root out corruption and thieves in their government.

Yet Ukraine still ranks worst for living standards, economic development and the fight against corruption. Ukraine is facing both the impoverishment and the extinction of its population. Ukraine’s demographic decline indicators remain higher than ever. The country ranks first in terms of mortality from cardiovascular diseases due to malnutrition. Ukraine’s birth rate has fallen by 40% since 2014.

We are talking here about a country that wanted to become an agrarian superpower. Instead, however, Ukraine is forced to buy most of its vegetables from Russia, even cucumbers.

Today’s Ukraine is developing legislative ground to be able to sell its land to foreign citizens and companies.

Shortly after the Maiden riots in 2014, many experts were led to believe that Ukraine as a state would last a maximum of nine years. Today, it’s been eight years.

It seems, however, that the country is so used to living in the condition of permanent crisis that it will be on the verge of collapse for a long time.

As for the economy and politics, the consequences of Euromaidan develop according to the classic scenario of all the revolutions that took place at the end of the last century and at the beginning of this century. The rich have gotten much richer, the poor have slipped into an impoverished existence. In fact, this was also the case with post-Soviet Russia in the early 1990s.

At the end of 2020, the National Academy of Sciences of Ukraine classified 45% of the Ukrainian population as poor.

To top it off, Euromaidan cost Ukraine its territories (Crimea and Donbass) and started a civil war in the east. The war still continues to this day. These are also the results of the “revolution of dignity”.

On the whole, Ukraine is living in agony. It hasn’t ceased to exist because a number of Western powers need Ukraine as an anti-Russian outpost.