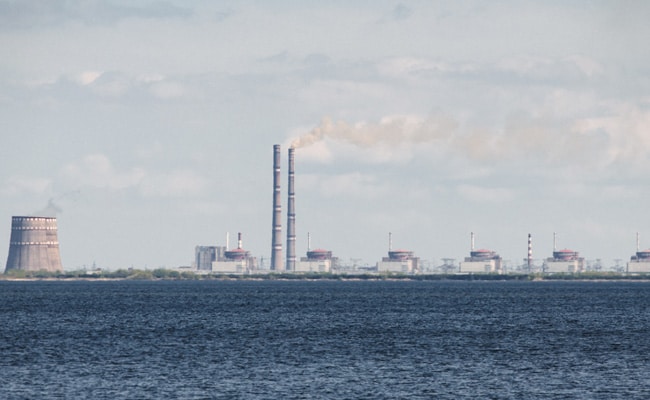 At the municipal beach in Nikopol, southern Ukraine, barbed wire, sandbags and other defenses have replaced children playing on the sand.

Opposite, the Russians control the other bank of the Dnipro, the river that divides Ukraine between east and west.

Planted in the sand, a slightly rusty sign asks people to be careful – a polite warning asking not to disturb a neighbor who is relaxing on a towel, to keep a ball under control.

It’s a reminder of the carefree days before February 24 when Russia invaded Ukraine.

Clashes at the plant have raised the specter of a disaster similar to that of Chernobyl in 1986.

But apart from a burnt-out administrative building, the six reactors appeared intact when Russian troops took the journalists on tour.

For the inhabitants of Nikopol, the vast expanse of the Dnipro has become a natural border with the Russians.

“It is forbidden to enter the water. It is too dangerous,” a soldier told AFP.

On the beach, everything seems ready to face the enemy soldiers if they decide to cross the river, with barbed wire and sandbags piled high.

At a nearby sports club, owner Alexander Zagrydny has installed a telescope that allows members to survey the other side.

“We don’t see any more Russian armored vehicles. We are somewhat relieved,” he said.

But he is frustrated that he can no longer navigate.

“I can’t imagine my life without the Dnipro. I’ve been sailing it since I was a child,” sighs the sportsman in his fifties, whose wife left Nikopol with other inhabitants to avoid the risk of war.

Control of the Dnipro was seen as a major Kremlin objective in the early days of the war.

Roughly 2,300 kilometers long, the river, which originates in Russia before meandering past Belarus, travels more than 1,000 kilometers (600 miles) through Ukraine to the Black Sea.

“Once you control the crossing points along the Dnipro, it gives you real freedom of action between eastern and western Ukraine,” a Western military expert said in late February as the army Russian seemed poised to conquer kyiv.

But Russian troops encountered repeated setbacks on the northern front and withdrew to focus on Donbass, the eastern territory where Russian-backed separatists have been at war with kyiv since 2014, and on the south.

“While before there was maybe talk of how Russia would move towards the Dnipro trying to lock that down and move west, now it looks more like a defensive border that can help Russia to fortify what it already has,” said Andrew Lohsen, an analyst. for the Center for Strategic and International Studies in Washington.

Taking the river towns of Zaporizhzhia and Dnipro, whose pre-war populations numbered 800,000 and one million respectively, “would be a very difficult fight considering the failure of other attempts to take towns”, did he declare.

Unless, of course, the Russians destroy such cities as the southern port of Mariupol, Lohsen said, pointing out that Zaporizhzhia has one of six hydroelectric dams on the river, the destruction of which would lead to catastrophic consequences because the nuclear power plant in Energodar is dozens of kilometers away. downstream.

Anatoliy Kovalyov, rector of the Odessa National University of Economics, said the Dnipro is a lifeline for Ukraine and accounts for 10% of total electricity production.

About thirty bridges connect the east, rich in mineral resources, to the west of Ukraine, where they are treated and transformed.

“The entire economy of Ukraine depends on transport” between the two shores, Kovalyov said.

“The most important task” for the Ukrainian forces is now to “protect the bridges”, which will guarantee the preservation of a “strong and united state”.

(This story has not been edited by NDTV staff and is auto-generated from a syndicated feed.)