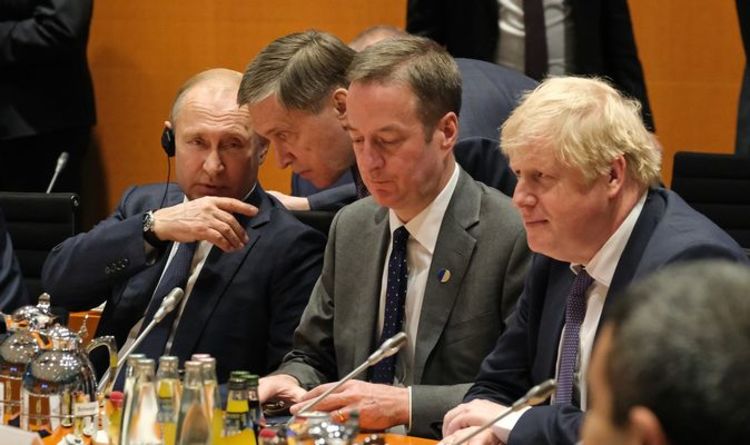 The prime minister has said President Putin must not be allowed to ‘rewrite the rules’ of international law amid growing fears the Kremlin will order an imminent invasion of its neighbour. As the first British troops and high-tech military equipment were sent to the Eastern European country, Mr Johnson promised Britain was doing “everything possible” to support the Ukrainian people.

Ukrainian soldier with the 56th Brigade in a trench on the front line in Pisky, Ukraine (Image: Getty)

And he told Putin, who has massed up to 100,000 troops along the Russia-Ukraine border, to stop his “disinformation campaign”. Around 100 British military personnel and anti-armour missile systems were sent to Ukraine this week after weeks of border troop reinforcements by Moscow.

But despite gathering personnel, tanks and artillery, the Kremlin insists it has “no plan” to attack Ukraine. He says his troops are there for exercises and he has the right to move them freely on his own soil. British soldiers will train Ukrainian forces in the use of defensive weapons systems.

Mr Johnson’s official spokesman said: ‘A small infantry training team is deploying to help the Ukrainian Armed Forces familiarize themselves with the defensive systems we provide and ensure they are capable to use them as soon as possible.

“Operation Orbital, our training deployment to Ukraine, has a routine commitment of approximately 100 personnel which will fluctuate depending on the type of training taking place.”

Mr Johnson told a Cabinet meeting yesterday that the UK was doing all it could to support the people of Ukraine in the face of ‘a Russian disinformation campaign aimed at undermining their sovereign neighbour’.

Downing Street said: “He stressed the need for countries to fully understand the risks posed by Russian aggression and to work more closely together to support Ukraine. The Prime Minister said President Putin should not be allowed to rewrite the rules and that, as a free democracy, Ukraine must continue to be allowed to aspire to NATO membership.”

Moscow yesterday rejected further talks on Ukraine unless the West meets its demands for sweeping security guarantees – including a permanent ban on Ukraine’s NATO membership. US Secretary of State Antony Blinken traveled today to Kiev, the Ukrainian capital, to meet with him.

Talks in Geneva, Brussels and Vienna last week did not allay fears, with Russia insisting its demands must be taken seriously. Foreign Minister Liz Truss said diplomatic efforts had been intensified in recent weeks to curb the aggression and that there was a strong relationship between Kyiv and London.

Mr Johnson, who last spoke to President Putin on December 13, said he “remains open” to further talks with Russia to avoid military action. Two RAF transport planes flew into Ukraine overnight with the missile systems and troops on board. The flights did not cross German airspace, following reports that Berlin is trying to remain neutral on the issue.

The 100 British soldiers will be in Ukraine for a short period only for training. They will not engage militarily with Russian forces. Meanwhile, Downing Street has also urged Russia to accept an invitation from Defense Secretary Ben Wallace to take part in critical talks in London on the crisis.

Number 10 said “we certainly hope” that Moscow will respond positively to the invitation made by Mr Wallace on Monday, but said he was “still awaiting a formal response”. The offer came as fears grow that an invasion could be days away.

Mr Wallace said he had invited his Russian counterpart, Sergei Shoigu, to visit London in the coming weeks for talks. He said the UK was “ready to discuss issues relating to mutual security concerns and to engage constructively and in good faith”.

Wallace added: “We unequivocally support [Ukraine’s] sovereignty and territorial integrity within its internationally recognized borders, including Crimea. Ukraine is an independent and sovereign country of a proud and independent Ukrainian people.” The conflict between Russian-backed separatists in eastern Ukraine and the country’s military has been going on since 2014 and has gone on to at 14,000 dead.

Although a fragile ceasefire is in place, the recent build-up of Russian troops has raised concerns across the West. The United States has threatened Mr Putin with sanctions “unlike he has ever seen” if Ukraine is attacked. In an article published on the Department of Defense website yesterday, Mr Wallace debunked Mr Putin’s NATO propaganda.

He said: “First, NATO is fundamentally defensive in nature. At the heart of the organization is Article 5 which requires all members to come to the aid of another member if attacked. No ifs and no buts Mutual self-defense is the cornerstone of NATO This obligation protects us all Allies as distant as Turkey and Norway, or as close as Latvia and Poland all benefit of the pact and are obliged to respond. It is a true defensive alliance.

Mr Wallace added: ‘Secondly, the former Soviet states were not extended ‘to’ by NATO, Russia but joined at their own request. The Kremlin is trying to portray NATO as a Western plot aimed at encroaching on its territory, but in reality, the growth of alliance membership is the natural response of these states to its own malign activities and threats.

“The allegation that NATO seeks to encircle the Russian Federation is baseless. Only five of the 30 allies are neighbors of Russia, with only 1/16th of its borders contiguous to NATO.

“If the definition of being surrounded is that 6% of your perimeter is blocked off, then no doubt the brave men who fought in Arnhem or Leningrad in World War II would have something strong to say about that.”

It’s time for NATO to take a bold stance

THE situation in Ukraine is clearly very dangerous and, by accident or design, Russian President Vladimir Putin is taking us to the brink of war. The right way to handle its expansionist policy is clearly the subject of intense debate.

Some seek appeasement, seemingly hoping that if they hide their heads in the sand, the situation will go away. This will not be the case. Our Secretary of Defense, Ben Wallace, has offered talks while assisting Ukraine, particularly with cutting-edge cybersecurity expertise and anti-tank weapons.

But it is regrettable that a power like Germany has ruled out supplying arms, no doubt aware of the importance of Russian gas for the revival of its economy. It is important to have NATO people in Ukraine so that if there should be an armed attack from Russia, we can claim a right of self-defence.

However, it would be a huge test for NATO’s resolve as Ukraine is not a member. But I am one of those who think the time for talking is over. Putin’s demands are unacceptable, in particular that the current members of NATO, the three Baltic republics – Latvia, Lithuania and Estonia – should not be allowed to accept NATO reinforcements, including anti-missile missile systems. ballistics, without his consent.

If we accede to Putin’s demands, it would undermine the sovereignty of these states, which suffered under Russian rule during Soviet times.

There are also those in the UK and elsewhere in the West who feel that Russian claims should be treated with sympathy and who argue that what Putin really wants is to restore the territorial integrity of the Soviet Union. But that’s how World War II began, as Germany pushed to restore the borders. In 1938, Hitler demanded that Germany receive the Sudetenland, then part of Czechoslovakia, and the Compromisers handed it over to him.

The following year, he demanded the return to Germany of Dantzig, a free city in Poland. The result was its invasion and our declaration of war in 1939. Today the Baltic republics and Poland want nothing to do with Russia and 90% of Ukrainians voted for a sovereign, independent state.

So maybe now is the time for the West and NATO to stand firm. Not only should we help Ukraine, we should support the Baltic States and encourage Finland to join NATO. And we shouldn’t be intimidated.

There should be more staff in Ukraine. We should share modern weapons and anti-ballistic missiles. And we shouldn’t negotiate with Russia until Putin withdraws his claims.

Finally, the Germans should refuse to activate the gas pipeline from Russia, and the West should increase economic sanctions against Russia. And Putin shouldn’t think for a second that NATO has to seek his approval to arm its own members.

Another war in Europe is in no one’s interest. But unless Putin realizes that we take the security of NATO members and the sovereignty of Ukraine seriously, we are closer to the conflict, not further.

Russia is reducing its embassy in Ukraine, a possible clue to Putin’s next move