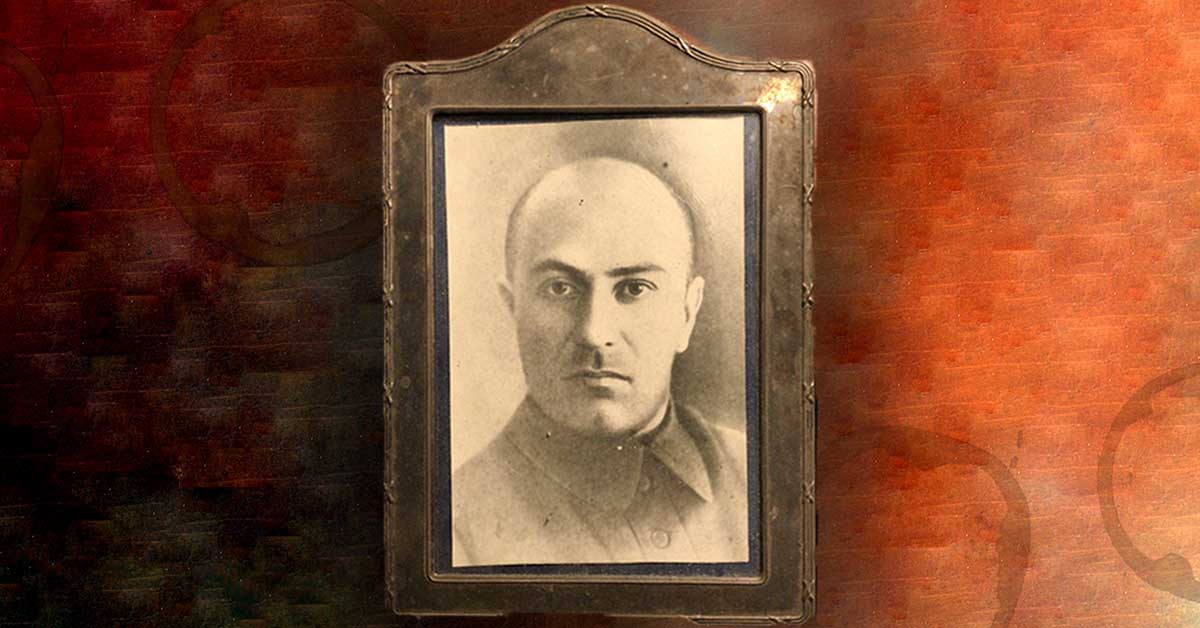 This is the second of two essays exploring the intertwined histories of Russia and Ukraine, told through the story of one family. Read the first essay here. Our next event on 7/12, “What is our responsibility in our government’s wars?” explores in more detail how we might wrestle with the dark stories of war. Register here.

A thick, dusty file records the journey from life to death of my grandfather Boris Bibikov, an official of the Communist Party of Ukraine, at the hands of the Soviet secret police. The dossier documents his arrest in an exclusive Party sanatorium in Gagry in July 1937 and recounts what happened to him until his execution near kyiv in October of the same year.

I read it during my first visit to Kyiv in 1995, in the former headquarters of the People’s Commissariat for Internal Affairs, or NKVD, the secret police on Volodymyrska Street, near the Kyiv Opera House. At that time, the building was the headquarters of the Ukrainian Security Service.

“Your grandfather believed,” said a young officer who sat with me reading the file as we took a smoke break in the growing darkness. “But don’t you think his killers believed too?”

The answer is yes, of course they all believed – in a better world, in a bright future.

“To do evil, a man must believe he is doing good,” wrote Alexander Solzhenitsyn in The Gulag Archipelago. “If my life had gone differently, wouldn’t I have become such an executioner myself?”

While much of the world condemns Russia as an aggressor against Ukraine, those of us who are descendants of their strained relationship understand how history and geography curiously shape the morality of nation states. . Stretching almost 2,300 miles from the Black Sea to Belarus, the modern Russian-Ukrainian border, drawn in 1991 after the collapse of the USSR, is a border that my ancestors – witnesses to the empire, descendants from the Russian nobility, loyal Soviet colonizers became anti- The Stalinists, enemies of the Soviet state and finally refugees, would have neither recognized nor understood.

Like eight generations of Bibikov before him, Bibikov believed that enlightened rule from Moscow would bring prosperity, equality and happiness to Ukraine. Like them, he reaped the benefits of being a loyal servant of the Russian Empire. My 18th century ancestors received estates from a grateful Catherine II, including 25,000 serfs. Bibikov’s awards were more modest but still favored by Soviet standards. As one of the Russian manufacturers of Kharkov Tractor Planthe had a four-room apartment, a peasant maid who slept in a closet, a gleaming Packard, a luxury vacation, and even as hunger stalked Ukraine under Joseph Stalin’s collectivist dream, food to feed his family.

Without a doubt, my grandfather witnessed the horrors that unfolded around Kharkov during the Holodomor, Stalin’s man-made famine that starved millions of Ukrainians. He must have been aware of the daily patrols sent out to pick up the emaciated bodies of the peasants, of the ruthless units of the Red Army sent out to seize the last grains of grain from the starving people. Bibikov had to struggle to rationalize his place in this nightmare. Maybe he believed his great tractor factory would help produce enough food to feed the shining cities promised by Stalin, but maybe just a little too late to help the dying millions around him. This is why even Bibikov, until then a loyal viceroy in the service of the Soviet empire, made the fateful and fatal choice to reject Stalin.

While much of the world condemns Russia as an aggressor against Ukraine, those of us who are descendants of their strained relationship understand how history and geography curiously shape the morality of nation states. .

My grandfather’s NKVD file lay heavily in my lap, a swollen tumor of paper. It weighed about 3 pounds and smelled of slightly sour musk. Most of the pages were flimsy, onion-skin official forms, punctured in places by typewriter strikers. Near the end were several sheets of stationery covered in thin, watery handwriting: my grandfather’s confession to being an “enemy of the people” and to sabotaging the factory to which he had devoted his career.

Turning to the end of the NKVD file, I found a receipt confirming that Bibikov had read and understood the death sentence issued against him by a closed court in kyiv. A scribbled signature was my grandfather’s last recorded deed.

My grandmother Martha Platonovna Shcherbak was arrested shortly after her husband and sent to the Gulag in Kazakhstan for the crime of being the wife of an “enemy of the people”. She spent 15 years there and went crazy.

The Bibikovs’ children, my mother Lyudmila and her older sister, Lenina (named after Lenin), were first sent to a children’s prison, and then to an orphanage in Verkhnodniprovsk. When the German army advanced in 1941, older children, including Lenina, then 16, were forced to dig anti-tank trenches. The last remaining staff commandeered two barges on the Dnieper, carried Lyudmila and about 40 of the youngest children on board and set them adrift. The party then took horse carts and wagons past Zaporizhia, east into the steppes and across the Volga as the German Sixth Army descended on Stalingrad (now Volgograd).

Many Ukrainians – survivors of Soviet collectivization and the Holodomor – saw the Germans as liberators. The Germans, in turn, enlisted Ukrainian nationalists, including instigator Stepan Bandera and his Ukrainian Insurgent Army (UPA), to their cause. The UPA rounded up and murdered thousands of ethnic Poles and communist supporters. Some Ukrainians, who associated Jews with Bolshevism, enthusiastically handed over their Jewish neighbors to the SS Einsatzgruppe extermination squads.

UPA units continued to fight the Soviet Army until the early 1950s. Bandera himself would eventually be murdered by the KGB in Munich, in 1959, poisoned with a cyanide gun. To this day, one person’s view of the UPA is the ultimate political indicator of modern Ukraine: Is Bandera a great patriot or a collaborating Nazi pig?

There’s not a lot of common ground. Young post-independence Ukrainians see him as a national hero, commemorated on billboards and flags. My mother, her family, and the vast majority of modern Russians came to see Bandera and the UPA unequivocally as fascist traitors. She remembers joining the Russians and others fleeing the Ukrainian and German advance. She remembers crossing the Volga as a scared young girl on a steel barge, crammed to the gunwales with refugees. It must have been shortly after August 23, 1942, when Red Army sappers blew up the bridges of Stalingrad. Later she reminded me how their broken beams tilted in the water.

After the Second World War, the Germans were described as knowing kollektivschuld, a “national disgrace”, for the crimes committed by their compatriots. No such reckoning followed the Holomodor, the collapse of the Soviet Union, or the birth of the modern Ukrainian state. Inevitably, millions of Russians continued to gaze upon Ukraine with the condescending eye of empire. My mother vividly remembered the Victory Parade of May 9, 1945. Tens of thousands of German prisoners of war – in tatters, half-starved, but still in impressive marching order – marched around the ring road in the gardens from Moscow. She remembers feeling sorry for them.

My mother met a young Welsh scholar in Moscow in 1963 and eventually married and moved to London. Even after spending years among liberal and passionately anti-Soviet émigrés in the West, she struggles to see Ukraine as a country truly different from Russia. She teaches Russian literature. The greatest Ukrainian writers, notably Nikolai Gogol, are an integral part of a common heritage. For her, as for millions of Russians, the idea that Ukraine broke the borders of empire to form its own national identity is dissonant and foreign.

Of course, the most prominent among the Russians who refuse to accept the new reality is Vladimir Putin, who has repeatedly asserted that “Ukraine is not a real country”. Many Russians see Ukrainians as nashi Lyudi– “our people” in Russian – in the family, possessive, condescending sense. And many Ukrainian citizens from the Russian-speaking east of the country will be to tell about tell you that they are “culturally Russian”, whatever that means.

Even with such cleavages – historical, political, family – the European-leaning West and the Russian-leaning East of Ukraine have managed to coexist for 23 years of independence – a chaotic, corrupt and dysfunctional independence, for sure. But a new generation of young Ukrainians, brought up to learn their country’s mother tongue and revere its national heroes, have pinned their hopes for the future on another kind of postmodern empire: the European Union.

As head of the Moscow office for Newsweek magazine, I traveled to Ukraine in 2014 to report on the war that began in 2014 shortly after Moscow-backed Ukrainian President Viktor Yanukovych rejected calls to sign an association agreement with the European Union. The decision rocked Kyiv – culminating, ultimately, in 94 days of escalating street battles, Yanukovych fleeing as protesters swarmed his palace outside Kyiv, Putin seizing Crimea, separatists from provinces of Donetsk and Luhansk in the seceding Donbass. This conflict was the first act of today’s full-scale war – a war waged for identity, the legacy of the empire, and the right of former captive nations to free themselves from their former masters.

My brain is writing the stories of the armed factions and proxies tearing Ukraine apart, after it erupted into a bigger war in February of this year. My blood thinks this about Ukraine: that among many other things, it has always been a place of new beginnings – for Ukraine, for Russia, for humanity. Always, like today, Ukraine is the place where empires are tested, where history turns.

The last document in my grandfather’s file, dated October 14, 1937, was a clumsily mimeographed slip with an offhand scribble of his tormentor. Given that the careful bureaucrats who compiled the dossier neglected to record where he was buried, this pile of paper is the closest thing we have to the earthly remains of Boris Bibikov.